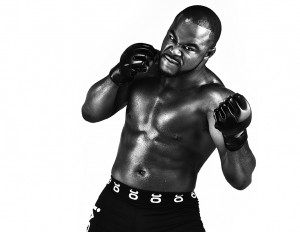 Rashad Evans better known as “Suga” is a former UFC Light Heavy Weight Champion who on June 15th will return to the ring after a three-month break to fight Dan Henderson for a chance at the #1 contender position in the Light Heavy Weight bracket. Media Mikes caught up with Rashad recently to discuss his preparation for the fight and to see if he has any plans to appear in more feature films and television series.

Adam Lawton: What initially interested you in trying out for season 2 of “The Ultimate Fighter”?
Rashad Evans: I watched the first season of the show and thought it was something that I needed to try. I knew Josh Koschek from wrestling and through his work at the University of Buffalo. He told me he was getting into and after seeing him on the show I knew it was something I had to do. The real opportunity came when Dan Severn was inducted into the Hall of Fame. I was affiliated with Dan at the time and he told me that the UFC was looking at one of his guys as they wanted a heavy weight. Dan told me he thought I would never be a heavy weight but I asked them to still let me try. He said that he would give them a heads up about me but I would still have to do the video and all that stuff. I did all that and I guess they liked what they saw so I went to Las Vegas and did the try out.

AL: You have been one of the few coaches on the show that have been on both sides of things. What was it like going back to a show you won but this time as a coach?
RE: Going back as a coach was a little bit of a look at how far I have come along in my career. When you are riding a roller coaster you very rarely get a chance to look and see what is going on. Prior to being on the show initially I didn’t have any sort of perspective. Going back as a coach I was able to see where I came from and look in to the eyes of the guys competing and see their mind set. It was really cool to experience all those emotions again and quite refreshing actually.

AL: Have you been trying any new training techniques to physically get ready for your fight with Dan Henderson on June 15th?
RE: I actually haven’t tried anything new. I have more so gone back to the old way of doing things. I have gotten out of my grinding mode which is more of a mindset than actually grinding my body down. I am doing those extra little things that I have to do to make sure that I am ready for the fight. Everybody has different things they do to get ready but I have to make sure I am doing what I need to do. It may be getting up at 5am to get my running in or to be at the gym hitting the heavy bag after practice. Those are the things I have to do and the sacrifices I need to make to ensure I am ready for the fight.

AL: How have you been preparing mentally knowing that this could be one of your last shots to contend for the title?
RE: I haven’t tried to put a lot pressure on myself or putting myself in the “do or die” mode. I know I don’t want to go out losing 3 matches in a row. I don’t want to back myself in to a corner where I am afraid to try and do things. However I do know there is a sense of urgency to go out there and put on a good show. I also am putting a sense of urgency on my performances to come. Once you see behind the curtain things can be a little bit disheartening. Having been in the UFC for awhile now and seeing how things happen it can kind of not motivate you as your going through the motions of things. You have to be able to find something within yourself that allows you to challenge yourself independently from any chance to fight for a title. You have to have the will to go in that ring in

fight. When I first started it wasn’t about television or people reading about things I have done it was about me going out there and having fun. Somewhere along the line I had gotten out of that.

AL: Do you find taking extended time off between fights makes it harder to want to get back in the ring?
RE: Yes, It does challenge you more after taking an extended break. When I came back prior to the Tito Ortiz fight I was really pumped up and didn’t have a lot of down time or distractions. When I came back for the Jones fight I had a lot of stuff going on at that time. I was going through a divorce and all the things that come with that. It was a really difficult time in my life. The last 2-3 years of my life have been hard and I have been tested both emotionally and spiritually. In order to get past that stuff I have had to put myself in the right frame of life and competing.

AL: When you’re not in the ring you have ventured in to both television and movies. Do you see yourself wanting to do more of that after your career in fighting is over?
RE: I would be very happy if that is what I am able to do after my career in fighting is over. I would love to do television and be able to give the fans my perspective on fights. That is something that is fun to do. It is also a challenge. It is a fun challenge and I love this sport. It has saved my life and to be able to stay close to it in some capacity would be really amazing.