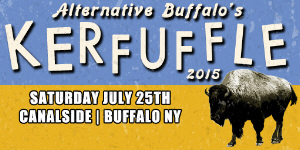 Alternative Buffalo 107.7 held their second annual Kerfuffle music festival on July 25th at the unique multifaceted venue known as Canal Side located in Buffalo, NY. The venue which as the names suggests is located on the canal and is nestled snugly underneath the nearby highway overpass and features its very own battleship. The unique surroundings proved to be the perfect setting for the annual music festival which featured 10 bands and a variety of local vendors.

Kicking off the nine and a half hour day was Art Voice Boom contest winners Uncle Bens Remedy. The group proved they were the perfect choice for this spot as they brought just the right amount of energy to help kick of the day’s festivities. The Valley Below would take the stage next followed by Civil Twilight and The Mowglis who despite being one member down still put on a solid performance for the growing crowd. Saint Motel would follow with their first ever performance in Buffalo and the crowd greeted them with open arms and praise especially during the playing of the groups hit song “My Type”. Cold War Kids, a group I was really interested in seeing were up next and despite what seemed to be a pretty solid performance by the band received only a luke warm reception from the audience which seemed to kill a bit of the day’s excitement.

New Politics would follow and almost instantly reinvigorating the crowd with their high energy stage performance. Lead singer David Boyd seemed to hold the crowd in his hand the entire length of the bands 30 minute which quickly put the day back on track for the near 12,000 people in attendance. The Airborne Toxic Event would be the first of 3 acts charged with closing out the day’s festivities. Sadly the band seemed less than interested in performing as the members sort of milled about the stage aimlessly going through the motions of a 40 minute set. After a brief set change New Jersey natives The Gaslight Anthem would follow by blasting through a 10 song set which featured crowd favorites “45” “American Slang” and “The 59 Sound”. Front man Brian Fallon and company took part in a playful game of kick the beach ball throughout the set which had the band cracking up making the performance fun for everyone involved.

Closing out the night were veteran performers CAKE who performed a variety of songs which spanned their 6 album catalog. With 24 years in the music business under their belt the band showed no signs of slowing down and treated the immense, sun baked crowd to songs such as “Frank Sinatra” Gloria Gaynor’s “I Will Survive” and the bands hit song “The Distance” which closed out the night.

Alternative Buffalo proved once again that they certainly know how to throw a party. With this being the stations second event of this magnitude it seemed to go off without a hitch and those in attendance seemed to really enjoy themselves. Great venue, music and weather made for an enjoyable concert experience and I cannot wait to see what they have in store for next year.