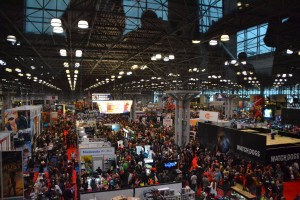 The annual New York Comic Con kapowed its way into the Jacob K. Javitz center once again this year for 4 days of fandom and craziness. From 10/10-10/14 the massive multi level convention center played host to the annual event which showcases everything from comics and video games, to pop culture icons and informative workshops. With 2012 convention attendance being reported as over 100,000 attendees for the 4 days this year’s events would easily be able to match if not top that number.

This year’s con featured a slightly different layout than that of previous years which proved to be a plus as several high traffic areas which normally wreaked havoc on fans were redesigned allowing for smooth passage to the different areas of the venue. This also included the entrances of the venue which saw expansive security fencing and added staff to help keep fans from spilling over into the bustling streets surrounding the hall. These two changes right off the bat made my time at the convention a lot better and a lot less sweaty. (If you have ever experienced the con you know what I mean). Though the convention seemed smaller than that of previous year there was certainly still plenty to keep fans busy over the 4 days. On the main convention floor fans were treated to impressive booth displays by Nintendo, Ubisoft and New York’s own Midtown Comics which all played host to a number of cool merchandise. As my assistant and I made our through the packed isles we stumbled across a number of different media personalities. Charlie Adlard of “Walking Dead” fame was spotted working commission pieces, Claudio Sanchez of Coheed and Cambria/ Evil Ink was signing for fans as were a number of other guests though out the event. To the left of the main hall was “The Block” which like in previous years was home to a bevy of multi medium artists who were on hand showcasing their newest works and products. Once again you never know who you will run in to as this time around I was lucky enough to meet punk icon Jerry Only of the Misfits who was on hand for the unveiling of the new Misfits Records logo.

Artist Alley was a buzz of excitement as hardcore comic fans filed in to meet their favorite artists and have their most prized books signed. Some of the longest lines on Friday belonged to the likes of artists Aaron Kuder (Amory Wars, Amazing Spiderman), Humberto Ramos (Superior Spiderman, Uncanny X-Men) and David Finch of “The Dark Knight” and “JLA” fame. There was certainly lots of talent on hand in this area of the convention which in my opinion was like a whole other convention in its self.

The Autographing area which much like last year still seemed worlds away from the constant bustle and activity happening on the main floor however a break from the crowd noise is always nice. On this day the longest lines belong to “The Office” star BJ Novak, “Star Wars” Anthony Daniels and “Dr. Who’s” Colin Baker. It wouldn’t be until Saturday/Sunday that the Hollywood heavy weights would turn out as booths laid in waiting for the likes of Sigourney Weaver, Chloe Grace Moretz and Sylvester Stallone who after a bit of research I found out was charging $395 per autograph and an additional $445 for a photo! Yes you read that right.

Also in the same vicinity as the autograph area was the always popular panel viewing rooms. Everyone from AMC’s “Comic Book Men” to the 25th anniversary of “Child’s Play” had events going on in one of the various rooms. Probably two of the biggest events for this day would be the “Comic Book Men” panel hosted by none other than Kevin Smith himself and the 10th anniversary panel for “The Walking Dead” comic which featured creator Robert Kirkman. Featured panels for the weekend included talks with “Robot Chicken”, “The League” and AMC’s hit series “The Walking Dead” which featured a majority of the cast.

Though this year’s event seemed a bit scaled back in the way of big celebrity guests other than the above mentioned and the main floor seemed lacking in several big name companies many of which are on the verge of major releases (Sony PS4 and Xbox 720 where both nowhere to be found) NYCC 2013 was a great time. Both my assistant and I were left shell shocked by all in which we took in and will probably use the time between this year’s event and next year’s event just to re-cooperate we certainly can’t wait to do it all over again in 2014.