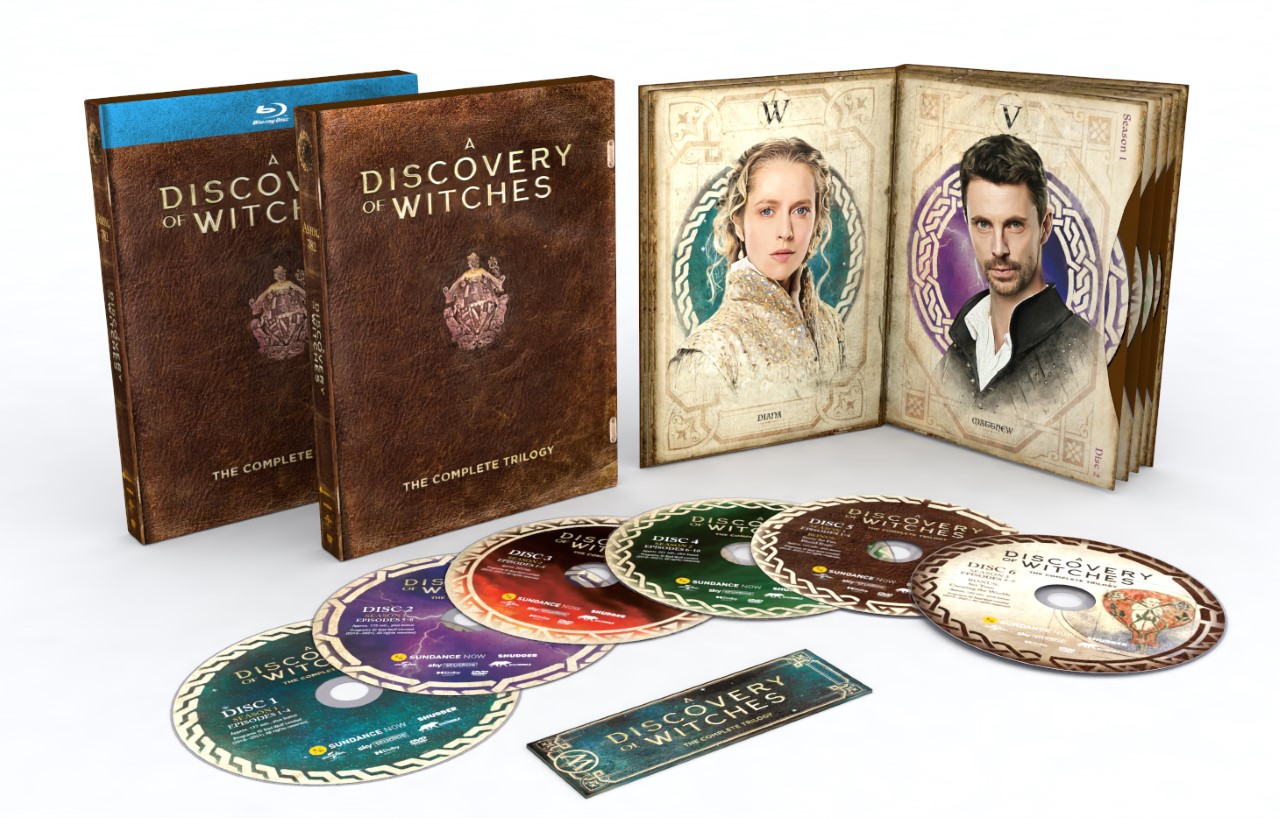 A Discovery of Witches is based on the “All Souls” trilogy by Deborah Harkness. I personally was not aware of the author and her body of work but after finding this show, I am definitely finding myself as a fan! This is the first time that all three seasons are available together in one Blu-ray set, A Discovery of Witches The Complete Trilogy, includes all 25 episodes, as well as over 80 minutes of bonus features on 6 discs and a collectible bookmark. If you were a fan of this series, this set delivers a nice collection of content as well as some decent bonus features to boot.

Official Premise: Adapted from Deborah Harkness’ best-selling trilogy of novels, A DISCOVERY OF WITCHES is a bold and romantic thriller that uncovers a secret underworld of vampires, witches and daemons hiding in plain sight for fear of persecution by humans. Brilliant historian Diana Bishop is a witch denying her own heritage. But when she unexpectedly calls up an ancient, bewitched manuscript, Ashmole 782, she finds herself thrown into the heart of a dangerous mystery – and into the path of the enigmatic geneticist and vampire Matthew Clairmont.

Season Summaries: Across three distinctive and gripping seasons, Diana and Matthew’s quest to solve the mystery of the book and their own long-prophesied connection to it throws them into the path of dangerous enemies. Season 2 takes them back to the 16th century, crossing paths with historical figures Diana thought she could only dream of meeting, as she comes into her own incredible power. In season 3, Diana and Matthew must try to make scientific breakthroughs into a terrible disease that affects their own family, deal with huge loss, new beginnings, and old foes, as their journey takes them towards a thrilling and incendiary conclusion.

Although this set is void of a digital copy, which is a bummer these days. At least they packed in some decent special features on the Blu-ray. There are a few featurettes including focus on the characters, the story and a set tour. As well as “Creating the Worlds” dives into the shooting locations and topping it all off with “Mythology, TV Magic, The Story of The Discovery of Witches”, which dives deeper into the show with cast/crew! Worth checking out for sure.

Filed Under: DVD/Blu-Ray Reviews Tagged With: