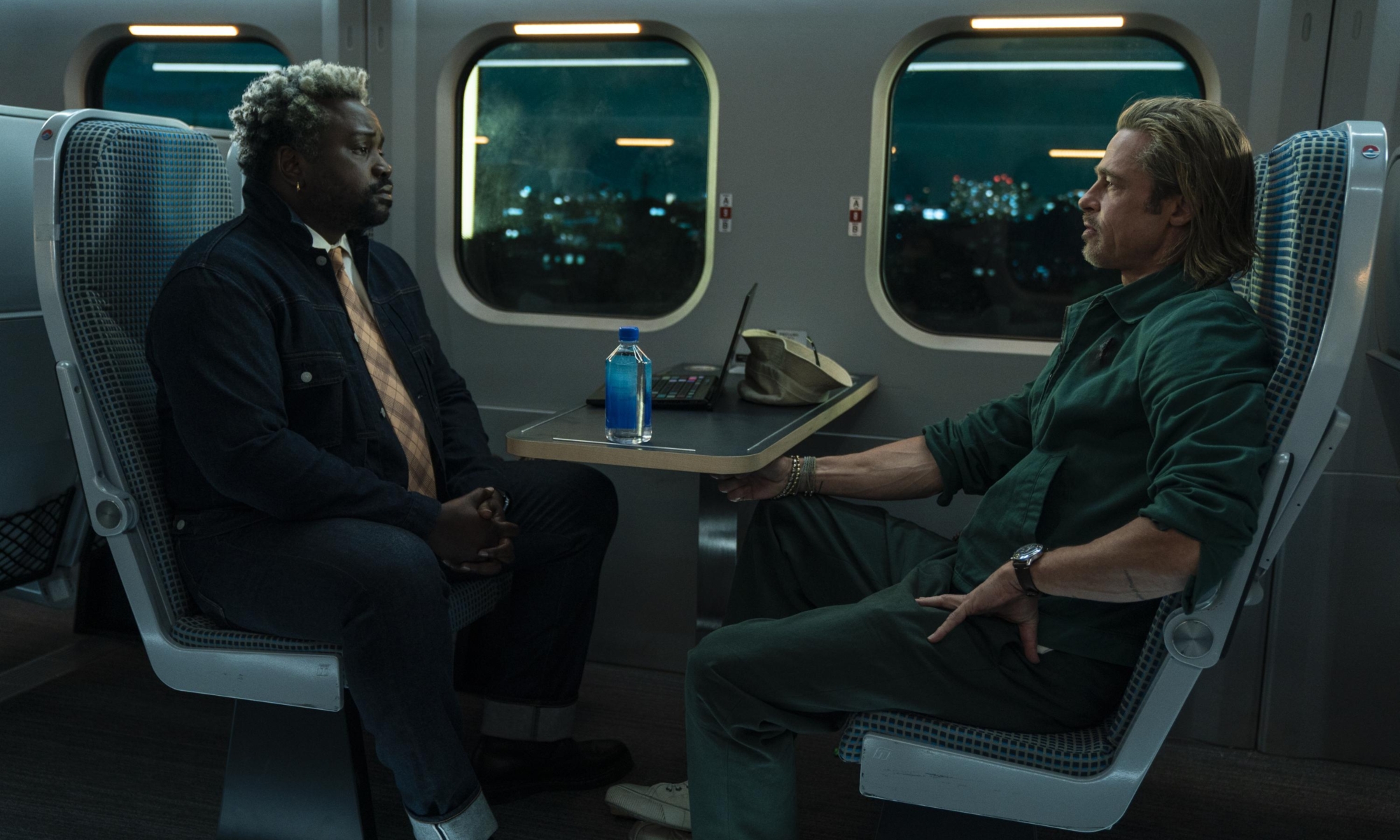 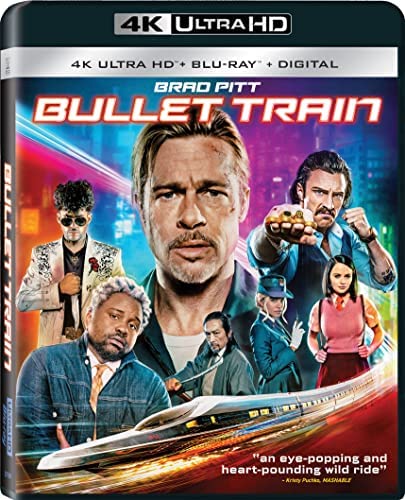 Ride or die! Heh-heh!  “Bullet Train” is basically John Wick on a train with a crazy cast of characters and falls into the more cartoony way of movies. There’s plenty of violence to go around, an awesome amount of gore, and some extremely funny lines and characters. It reminds me of “John Wick 3” in particular with similar production notes such as the abundance of colors and the well-choreographed fighting scenes. The Blu Ray picture and sound is nothing short of astounding! Bright neon colors are present from the start as intense purples, greens, blues, yellows, reds, and even pinks strike-through to make each train car look excellent. Flashback sequences go from a warm, orange-tinted look to a remarkable and blue-ish streak. Wardrobe colors, the big city lights at night, and the LED lighting of the train car interiors all look bold and full of life. It was truly a joy to behold.

This Blu Ray has an excellent Dolby Digital track! The sound effects are boisterous, robust, and continuously loud. These noises are nuanced and well-balanced in each speaker which flows smoothly in transitional sounds. Gun blasts, the fast traveling train herself, fight choreography, and glass bottles being broken all sound wonderful Explosions pack a loud punch as well. The low end of bass is booming with a smooth yet intense rumble that never has a rocky feel. The score and song cues are pitch-perfect that keep the film centered in its fun and entertaining atmosphere. The dialogue is always clean, clear, and easy to follow with no problems. The height speaker brings those sound effects from overhead, whether it be bullets flying by, rain, debris and body parts falling from above, and more. I really enjoyed watching this film! The Blu Ray is very well produced.

Director David Leitch co-directed the original John Wick (which clearly shows) film which led to him making “Atomic Blonde,”  :Hobbs and Shaw” and “Deadpool 2” (which I enjoyed more than the 1st film!). Leitch even was a heavy-handed producer on “Nobody” as well. If those movies were all mixed together and blended into a high-octane cocktail, the result would be “Bullet Train.”  An intricate world of assassins, a deadly mission, brutal fight choreography, and a comedic and cartoony take on the action all make up this film. And the great thing is, that all these elements have congealed together to make this a blast of a viewing experience. The performances are energetic with wry humor and witty dialog. You’ll almost have to view it twice to appreciate the wry humor. It may strike the novice viewer as strange on the first viewing. 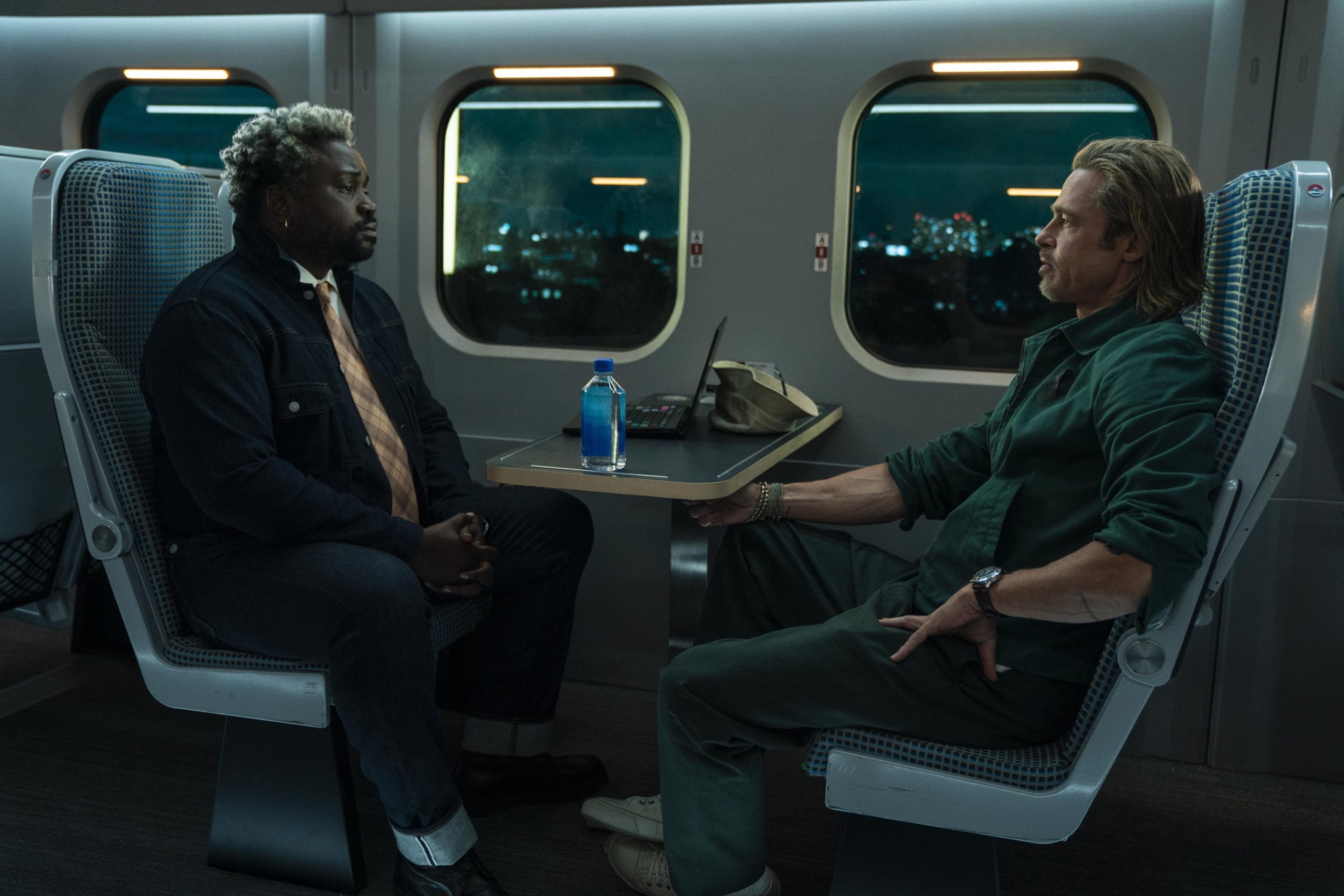 “Bullet Train” is set on a high-speed modern train where a group of assassins is all tasked with retrieving a briefcase that belongs to an infamous yakuza boss. Nobody realizes other assassins are on the train at first, but as soon as eye contact is made, the violence ensues in bar cars, passenger cars, and even on the outside of the train. With a cast list that stars Brad Pitt, Aaron Taylor-Johnson, Joey King, Brian Tyree Henry, Michael Shannon, Sandra Bullock and Channing Tatum. “Bullet Train” could easily get lost in the star power. But this script allows some unique personalities to collide, all made accessible through the psychology and personality traits of Thomas the Tank Engine. Yes. that’s right! It’s easy to see where films like “Snatch,” “Kill Bill” and even animated shows heavily influenced the style of the movie with their “in-your-face” camera swoops and pans, along with graphics that display character names on the screen. A trademark of Michael Bay as well. Not only that, the breaking-the-fourth wall that is so popular in “Deadpool”  also peaks its head out from time to time. “Bullet Train” can feel a little tiresome in parts when the film often cuts back to tell a story from the past. It disrupts the film’s flow here and there, but when the action is once again centered on the train, the pace instantly picks back up. In its meta way, the characters make it all self-aware of these flashbacks and how boring they can be.

Finally, everyone here is performing at the top of their game and having the time of their lives cutting it all up on set. Pitt is believable as a violent assassin when he needs to be and quickly turns on the comedic charm every chance he gets. Johnson and Henry are the true stars of the film though with their budding relationship and volatile personalities. And of course, Joey King is always a joy to watch on screen as she changes her chameleon-like emotions with whoever she shares the screen with. Leitch has conjured up a super-fun time at the movies with an A-List cast. “Bullet Train” is enthusiastic, crazy, and a surprisingly amazing time. It’s violent, comedic, and an all-around great time. Let’s all hope there are sequels. Highly Recommended!

4
Filed Under: DVD/Blu-Ray Reviews Tagged With: