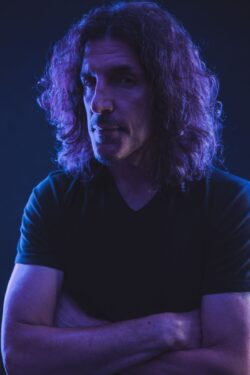 Frank Bello and Rare Bird proudly present the famed Anthrax bassist’s debut solo EP, Then I’m Gone. Issued as a deluxe gatefold split 12”, the EP contains three songs alongside excerpts from his 2021 autobiography, read by the author and accompanied by additional new music.

Bello performs all instruments (except drums) on “Then I’m Gone,” “It Won’t Be Long,” and “See Me Now,” as well as the score accompanying the narrated pieces, each selected and read from the book released with Rare Bird last year, Fathers, Brothers, and Sons: Surviving Anguish, Abandonment, and Anthrax.

“I revisited some really dark times in my life when I was writing my book, and writing these songs was the result of reliving them,” explains Bello, who appears on every Anthrax release since 1985. “Music has always been a great outlet for me as a coping mechanism. I felt it was a good time to put out these songs for people who connected with the book and maybe some who haven’t yet. Thanks for listening!”

A cornerstone of the legendary “Big 4” of metal alongside Metallica, Megadeth, and Slayer, Anthrax has sold over ten million albums, traveled the globe countless times, and collaborated with a diverse list of creative icons, including Public Enemy, Keanu Reeves, and the late “Dimebag” Darrell Abbott. Fathers, Brothers, and Sons details the tragedy and triumph of the music industry and Bello’s intense personal life.

Like the book, the songs on Then I’m Gone are intimate, revealing, and powerful. Then I’m Gone EP deluxe gatefold vinyl is available for preorder now in limited-edition purple and white/purple splatter variants, as well as standard black vinyl, direct through Rare Bird (www.rarebirdlit.com) and Experience Vinyl (www.experiencevinyl.com).

All Preorders include a digital download code with the full vinyl audiobook in the sealed vinyl jacket and a monthly email with links to audio, video, instrumentals, and bonus material.

ABOUT FRANK BELLO:
Frank Bello is among the most respected, talented, and charismatic musicians in hard rock. A diehard New Yorker, Bello joined Anthrax shortly after the release of the band’s 1984 debut and has appeared on every Anthrax release since, including classic albums like Among the Living (1987), Sound of White Noise (1993), and For All Kings (2016), totaling well over ten million in album sales around the world. Anthrax cemented a place in metal history as part of the “Big 4,” alongside Metallica, Megadeth, and Slayer. In 2011, the band was honored with special proclamations from the city on “Anthrax Day in the Bronx” at Yankee Stadium. Bello was briefly the bassist in Helmet and fronts Altitudes & Attitude as both singer and guitarist. He’s appeared on Law & Order in a small role and played himself on Married… with Children and Newsradio. Fathers, Brothers, and Sons: Surviving Anguish, Abandonment, and Anthrax was written with Joel McIver.