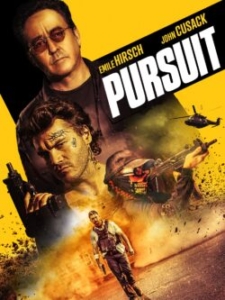 It’s always easy to say there’s too many cooks in the kitchen when the end product fails. But for a film that has four writers, you would think someone would have eventually read the script and axed some of the characters, trimmed the dialogue and cleaned up the jumbling, bumbling plot. But since that didn’t happen, we’re left with “Pursuit,” a film that’s almost too difficult to explain and even more difficult to care about.

So if I understand the 92 minutes I watched correctly, Rick (Hirsch), a hacker that is the epitome of hacker film clichés, is searching for his wife who has been kidnapped by a mysterious drug cartel, off screen. But while Rick is searching, he is being hunted by Mike (Manley), a New York City detective. Mike actually arrests Rick about a third of the way into the film, setting up the rest of the film which is about Rick potentially offering up worse individuals, including Rick’s father, played by John Cusack, who may have something to do with the kidnapping of Rick’s wife.

It’s sometimes difficult to tell where this movie is supposed to take place, who is working for whom, what characters are actually important to the story and which ones have been created to simply provide an exposition dump, which is funny since the exposition dump’s don’t clear anything up, and instead complicate the plot even further. Even with all the forced twists and turns, there is no payoff at the end for the ridiculousness on screen. It’s almost as if all four writers for “Pursuit” were told four different things about what the story was about.

Compounding the messy story issues in “Pursuit,” is the insane tonal shifts. In the opening sequence alone, the film tries to tell us it’s a techno thriller, but becomes so comically inept, it makes you wonder if one writer was writing a comedy, one writer was taking it too seriously, one writer was trying to figure how many ancillary characters is too many and one writer simply believed there wasn’t enough gun play. So when the film attempts humor, and it does frequently, it comes off jarring. We’re supposed to laugh at a bystander getting shot as some kind of physical comedy, but then in a few minutes we’ll see innocent women and children leaking life force after being shot? Those two things don’t jive well in an entire film, much less in a few minutes of each other.

Almost as if he saw the writing on the wall while reading the writing in the script, John Cusack, who’s predominantly featured in this film’s marketing, seems to be on autopilot as he casually drifts from mundane scene to mundane scene, at least the ones he’s in. I also wonder how much he was actually in it and how many times they just recorded him talking and then had an extra with their back turned for the scene. When we actually know Cusack is the one on-screen, he spends most of his time reacting or talking solemnly on the phone, which tells me his contract most likely stipulated that he would only do the film if they would film it at his house in one day.

Somehow “Pursuit” is equally grotesque and boring with it’s action. As far as low-budget action movies go, “Pursuit” isn’t even worthy of being in a discount bin in Wal-Mart or ran during off-hours on one of Pluto TV’s channels. You’re better off pursuing a different movie, or even a different hobby if “Pursuit” is the only movie you have at your disposal.