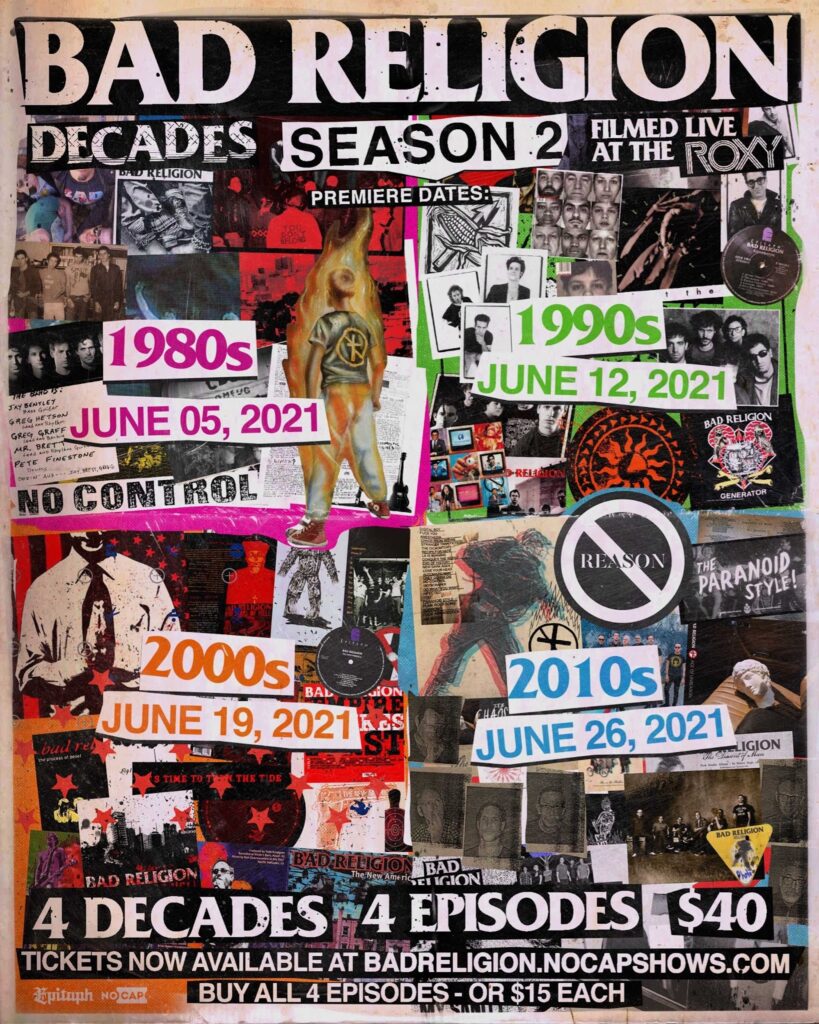 VIA NO CAP SHOWS

Bad Religion is releasing the second season of their wildly popular streaming event, Decades.  Bad Religion singer Greg Graffin says, “We were blown away by the enthusiasm of our fans surrounding our first streaming event last year. We realized that we had only touched on a couple of songs from each album during Decades: Season One. We wondered if we could dig a bit deeper into our catalog and do it again. Many of these songs have never been performed on stage. Some of them are timeless fan favorites. A few, we may never attempt to play ever again! But all of them show the diverse and even experimental nature of Bad Religion‘s repertoire over the years”.  All four episodes of Decades: Season Two will include a live performance set filmed at The Roxy in Hollywood, California, candid interviews with all current band members, and behind-the-scenes footage of the band as they rehearsed. Bad Religion will participate in an accompanying live chat during the premiere of each episode. Tickets and merchandise are available for sale on the Decades: Season  NoCap Shows page.

The ’80s – Bad Religion performs songs from their albums How Could Hell Be Any Worse, Into The Unknown, Suffer, No Control and Against The Grain (yes, it was released in 1990 but, fuck it, we do what we want). Expanded exclusive interviews with band members and crew. Even more and fly on the wall rehearsal footage and behind the curtain shenanigans.

The ’90’s – Bad Religion performs songs from Generator, Recipe For Hate, Stranger Than Fiction, The Gray Race, and No Substance. Exclusive interviews with band members and crew.

The ’00s – Bad Religion performs songs from The New America, The Process of Belief, The Empire Strikes First, and New Maps of Hell. The band discusses the evolution of their sound.

The ’10s – Bad Religion performs songs from The Dissent of Man, True North, and Age Of Unreason. The Covid-19 pandemic cut short their plans to tour in support of The Age Of Unreason. Many of the songs included are being performed outside of the studio for the first and possibly last time.

No Cap Shows will host Decades: Season Two; a four-episode package will sell for $40, individual episodes are available for $15. Tickets for Decades: Season Two will go on sale Tuesday, May 18, at noon PST. Episodes will remain up for sale and viewing till July 31st at midnight PST.