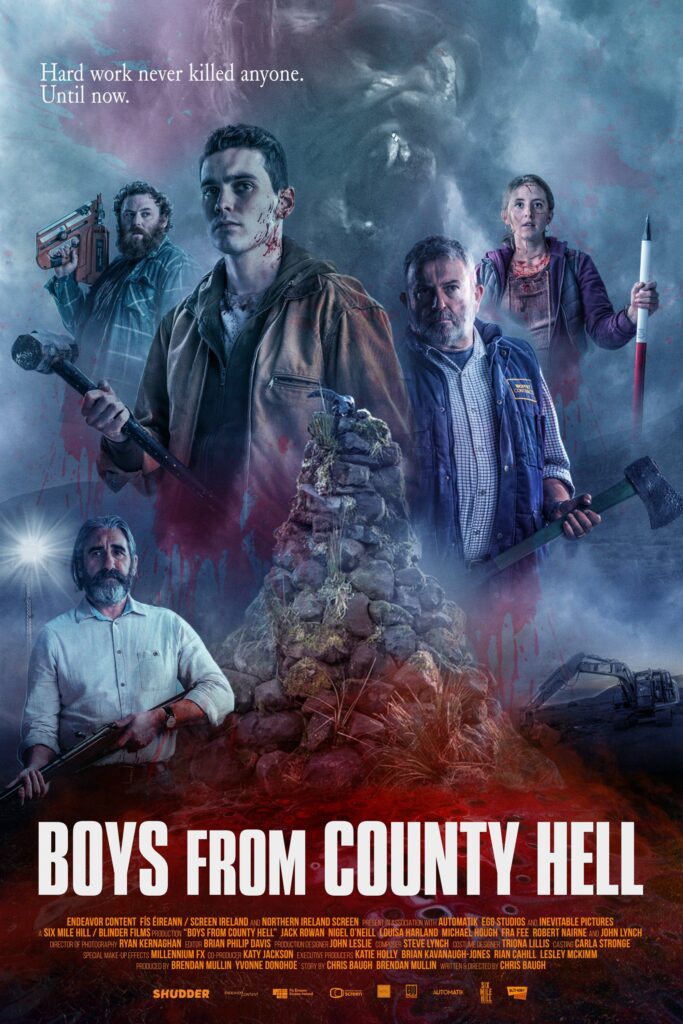 “You gonna tell us to ‘Stay off the moors’?”

“This is Ireland, lad… there aren’t any moors.”

Eugene (Jack Rowan) and  William (Fra Fee) have been busy spending their days surviving unwanted construction work, racking up hearty pub tabs and swindling cash and beer from tourists at the grave site of Abhartach – a legendary Irish vampire who may have inspired Bram Stoker’s famous Dracula novel. After wrangling a duo of cash-rich Canadian Dracula-enthusiasts, Eugene alerts them to the local disdain for the infamous fictional character… insisting the pub from which they just departed ‘The Stoker’ is only named so to monetize the fact that Stoker pillaged their town and stole their local legend and reaped the fame and fortune.

The undead are inadvertently invited to join the drinking festivities once again when the boys’ construction crew accidentally disrupts Abhartach’s grave and  a monstrous infection starts to spread through town, leaving the locals to face and overnight battle with the ORIGINAL legends.

“Boys From County Hell” is a perfect cocktail of horror and comedy from start to finish.  A brief visit to sleepy, small-town Ireland where you’ll immediately want to open a tab and grab a pint with our misguided heroes even if their call to action means fighting vampires. Horror enthusiasts will immediately feel American Werewolf in London’s  Slaughtered Lamb vibes from  County Hell’s tourist-tailored watering hole but make no mistake, vampires are back and doing something entirely new and bringing a disarming level of gnarly gore out to play. These aren’t vampires that sparkle or seduce — these vamps are nightmare fuel and this film is simply delightful.

A reminder to research the origins of monster legends: lest you find yourself fleeing bloodsuckers armed with dangerous misinformation.  “This is important shit to know.”

“Boys From County Hell” will stream exclusively to Shudder on April 22nd in the US and Canada, as well as via the Shudder offering within the AMC+ bundle where available.