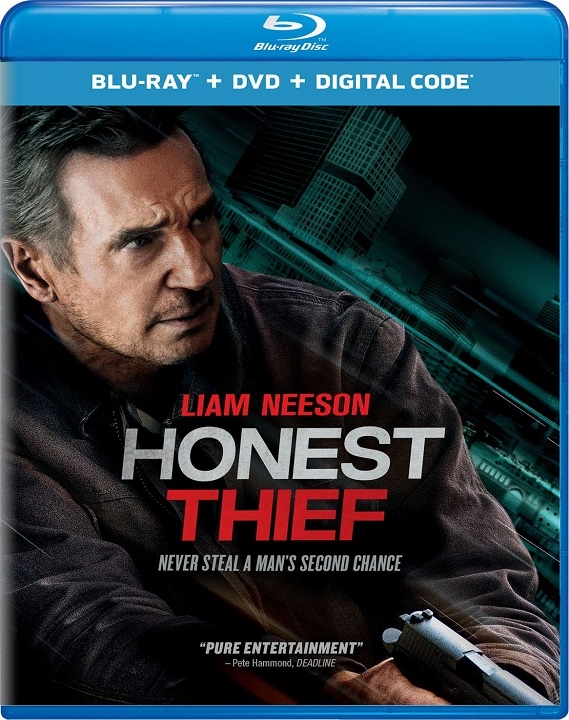 The film opens with Carter (Neeson) pulling off a final heist, in which he is very meticulous in his methods. In fact, he’s been nicknamed “the In & Out Bandit”. Carter then ventures into a storage facility to store personal items and “some of the funds”. He’s wise not to put the money all in one place. But here’s when our protagonist or antagonist, depending on where in the film you’re referring to him, makes his complete 180 degree turn. At the storage facility, Carter meets a woman and falls in love. So now he no longer wants to rob banks and wishes to give back the money and turn himself in. Hence he is now earned his title character, “Honest Thief”.

The film is directed by Mark Williams, who has worked on the television series “Ozark” (which I haven’t seen) and “The Accountant” with Ben Affleck (on both of those projects Williams also served as a producer). Set in Boston, the movie also stars Kate Walsh, Jeffrey Donovan, Jai Courtney, Anthony Ramos and Robert Patrick.

In this film Liam Neeson is not the good guy we’re used to seeing. This isn’t Taken nor The Commuter. He’s a bad guy that wants to do good. So Carter informs the FBI of his crimes and they don’t believe him. Who robs banks and now wishes to turn ithemselves in? Someone who has met the right woman. And as one character put it, “that’s got to be some woman.” Carter’s girlfriend is portrayed by Kate Walsh, who is caught up in the chase towards the 9 million dollars that Carter wants to turn in.

The film has some great action scenes including a house explosion that I loved! Carter is also a demolition expert, something he learned in the Armed Forces, which is how he blows the bank vault. Narrative in the film moves at a brisk pace. When Carter is on the run, he gets into some scuffles where I wanted to see the fighting skills Neeson is famous for in other films, but this isn’t “Taken.” He just knows how to blow up things. The baddies in the FBI are atypical. One has a heart change and the other is bent on getting that $9 million. Robert Patrick makes an appearance as an FBI supervisor (you will definitely remember him from Terminator 2 as the villainous T-1000).

I watched the film on Blu Ray where the sound and picture were crisp and clean. “Honest Thief,” to me, was a slight let down at first because my expectations were too high. I was looking for “Taken” or even “The Communter” but that’s okay. It just shows that Neeson is more than one dimensional. He has an amazing range and can play various roles.

There are no extras included in this set.