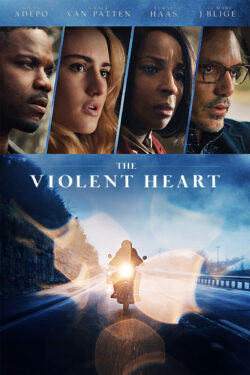 The brutal murder of a young woman leaves a family in agony and for her little brother, an intense anger that while growing up is a powder keg ready to explode at any given moment. “The Violent Heart” is a dark crime drama with a dose of young romance that keeps your attention from start to finish. With fresh, young actors who have talent to spare and some nice twists and turns, “The Violent Heart” provides some nice entertainment for an evening at home.

A nine-year-old boy named Daniel watches his older sister load a suitcase into a strange car and get in before it speeds off down the road in the middle of the night. Concerned, Daniel sets out after them on his motorbike. He spots the car sitting vacant on the side of the road. After shutting off his bike, Daniel hears voices in the nearby woods. Through the darkness, Daniel follows the sounds until he sees his sister and a man standing in a clearing. A pair of shots soon ring out and Daniel’s sister is dead.

Fifteen years later, his sister’s unsolved murder hovers like a dark cloud above his family. Daniel (Jovan Adepo, “Fences”) now works as a mechanic while helping to take care of his mother (Mary J. Blige) and younger brother. However, he still desires a life in the Marine Corps like his father. On one fateful day, 18-year-old high school senior Cassie (Grace Van Patten, “The Meyerowitz Stories”) drops off her father’s car to be serviced. There is an instant attraction and a romance soon blossoms between them.

Unlike Daniel, Cassie is close with her father, Joseph (Lukas Haas, “Inception”), who is an English teacher at her school. This fact makes an affair she uncovers all that much more devastating for her, but it does her closer to Daniel who has his own newfound struggles to deal with. Ultimately, “The Violent Heart” shows that no matter how deep secrets are buried, they seem to always rise back up to the surface.

Written and directed by Karem Sanga (“First Girl I Loved”), “The Violent Heart” has steady pacing throughout with a pair of nice lead performances by Adepo and Van Patten. Adepo demonstrates solid depth as he portrays someone who erroneously fears that his life will amount to nothing if he does not get into the military.

The film’s weaknesses can be found in a lack of serious relationship development between the characters within Daniel and Cassie’s immediate families. Therefore, we feel a sense of disconnection which makes it hard to be truly impacted when crisis hits the families towards the third act of the film. It is particularly disappointing that Daniel’s career military father is omitted from almost the entire story.

Overall, “The Violent Heart” is well worth your time.