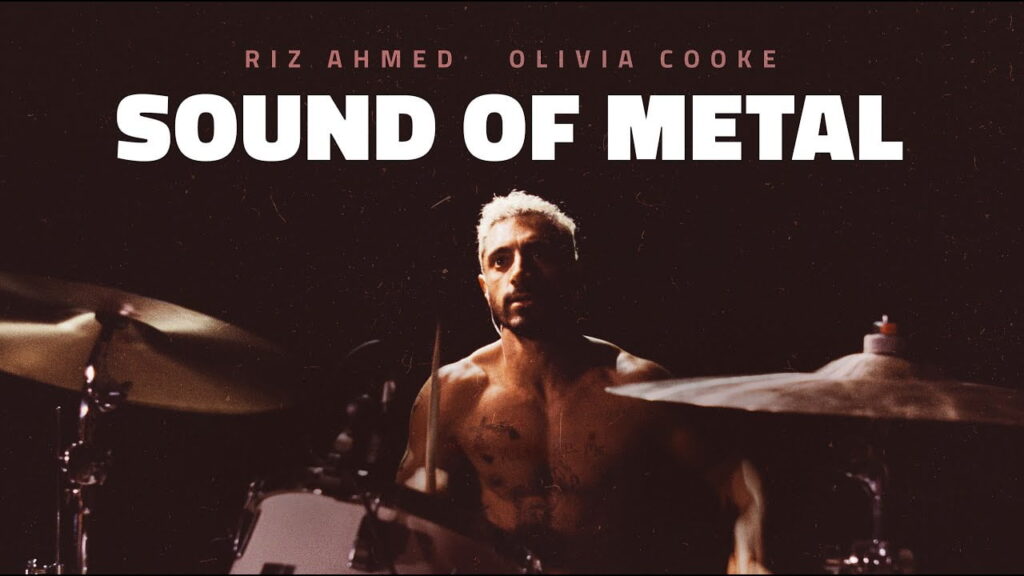 To be succinct, the Oscar-nominated drama “Sound of Metal” is a cinematic revelation which will sear itself into your memory. With six total Oscar nods, including Best Picture, “Sound of Metal” is a powerful story by first time, feature-length film director and co-writer Darius Marder. Riz Ahmed (“Venom”) in the lead delivers the best performance of the year with gritty and powerfully emotional acting as a man whose tenuous hold on sobriety is put to the test.

Trying to make a go of it as the heavy metal duo Backgammon, Ruben Stone (Ahmed) and Lou Berger (Olivia Cooke, “Ready Player One”) travel across the United States from one small gig to another in their RV, which also serves as their home and studio. It is a grueling lifestyle, but the couple, who are recovering addicts, are devoted to their music no matter their circumstances.

Without warning, Ruben begins to experience hearing loss, putting his role as the duo’s drummer in jeopardy. Eventually, Ruben is referred to a specialist who informs him that his hearing is deteriorating rapidly, and he will lose it permanently if he continues to perform. Angry, frustrated, and desperate not to lose his creative outlet, Ruben pushes forward anyway and tries to keep playing.

Scared that Ruben’s volatility might lead him to return to his addiction, Lou tearfully convinces Ruben to stay at a rural shelter that treats recovering addicts who are deaf. Run by a mild-mannered Vietnam veteran (Paul Raci), the shelter is supposed to be a place for Ruben to find peace with his new condition. Despite learning sign language and establishing relationships, Ruben’s desperation to get cochlear implants, and return to Lou, threatens his newfound stability.

Also nominated for Best Film Editing, Sound and Original Screenplay, “Sound of Metal” is a masterful tale of a man trying to find his footing in a world that has been turned upside down. Marder places us in Ruben’s head by allowing us to hear what he is going through. It is a strong tool that punctuates his deafness and how he attempts to adapt to it.

The emotions conveyed through the script are raw and brought with ferocity to the silver screen by Ahmed. Of course, Ahmed had a terrific co-star to bounce off of in the form of Cooke, who was snubbed horribly by the Academy in this writer’s humble opinion. They exchange a chemistry of the highest sincerity and her individual performance is just as remarkable. Last, but not least, Raci, a veteran TV series actor, is an absolute delight to watch as a genuinely good man who tries to show Ruben how he can overcome his challenges.

Overall, “Sound of Metal” is a heavy work of brilliant, cinematic art.