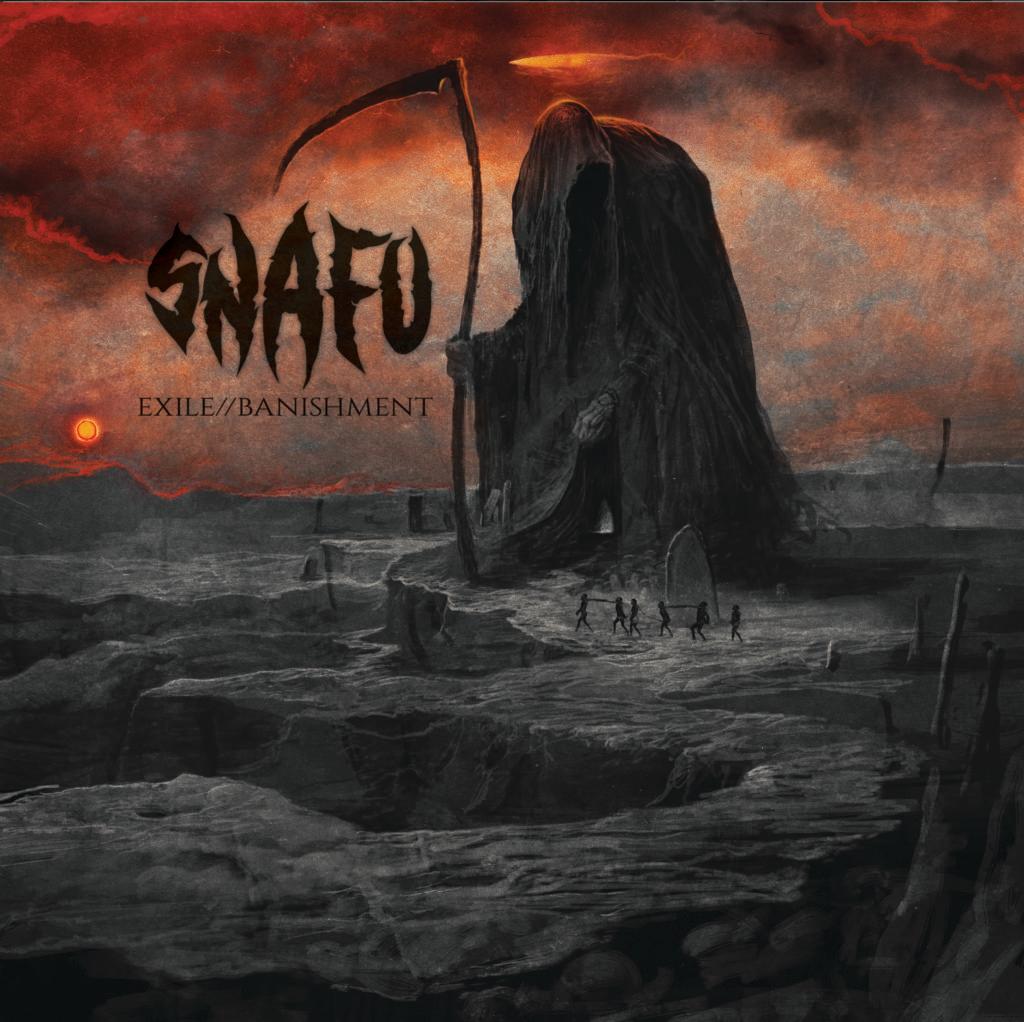 Hardcore thrash/punk unit SNAFU (Situation Normal All Fucked Up) will unleash their Exile//Banishment full-length on March 26th via Life After Death Records.

Spawned from the ruins of Detroit, Michigan, SNAFU self-released their debut full length, Fear The Future, in 2013. Later distributed by Profane Existence, the songs bore a raw punk expression of raging cynicism and the destructive nature of mankind. Further honing their artistry, 2015’s Present Day Plague LP stayed true to their aggressive raw punk roots while working in elements of thrash and grind. Punknews crowned the record, “the soundtrack for the apocalypse.” Glacially Musical concurred, further likening the work to a, “violent trip through a post-apocalyptic landscape of human decadence.”

This year, amidst plague, governmental corruption, and widespread societal suffering, the band spews forth the seething sounds of their third full-length, Exile//Banishment. Tracked and produced by Phil “Landphil” Hall (Municipal Waste, Cannabis Corpse, Iron Reagan etc.) and twin brother Josh “Hallhammer” Hall (Cannabis Corpse) at Blaze Of Torment Studios in Richmond, Virginia, mixed by Adam Shepard, and mastered by Joel Grind (Toxic Holocaust), Exile//Banishment is the band’s heaviest, darkest, and angriest affair yet focusing on personal frustrations and the hopeless future of humanity.

“I’ve been good friends with Phil and Josh for a couple years now,” reveals guitarist/vocalist Scott Curnow. “We’ve gigged with all of their bands multiple times and I sometimes crew for Waste and Iron Regan; we’ve also toured with Cannabis Corpse. Phil has always given me advice and tips on how to help SNAFU to be more successful. So when we were getting ready to record a mutual friend was like, ‘hey, doesn’t Phil and Josh track all of their own bands? You should hit them up,’ and sure enough they were down. It was great having them there. Josh gave a lot of input when it came to the drums and Phil lent some great ideas on guitar parts and some solos. This album has basically been finished since May 2020 and with the pandemic we didn’t really know what to do with it or how to go about releasing it.”

In advance of the release of Exile//Banishment, SNAFU delivers “Choking Game” for public feasting, noting of the track, “Conjuring old Sepultura and early Slayer vibes, ‘Choking Game’ offers a dark look into the world of mental illness, drug addiction, and depression so often overlooked in today’s society.”

Exile//Banishment, which features artwork by Vladimir Chebakov, will be released on CD, cassette, and digital formats.

Find preorders at THIS LOCATION.

3. The Pear Of Anguish