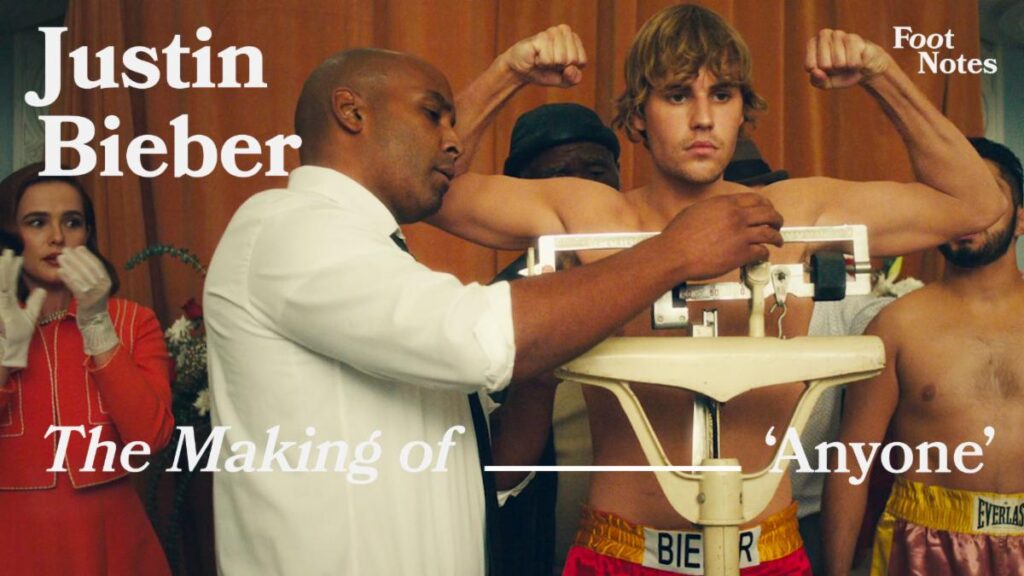 “I’ve always wanted to do a boxing video, and it made sense for this song being an 80’s power ballad… If you’re not in love, it makes you want to be in love. It’s kind of like The Notebook.” – Justin Bieber

WATCH “JUSTIN BIEBER – THE MAKING OF ‘ANYONE’ | VEVO FOOTNOTES”

Deutch, who hadn’t met Bieber until their first scene together on this project, reveals that she had to learn stick shift for the role, wore her own vintage clothing in the video, and improvised the final line, “I love you.”
Tilley and Bieber had discussed the concept for this video ad nauseum, and the song “Anyone” was the perfect fit to play out the storyline they envisioned. “It’s kind of like The Notebook,” says Bieber. Other key visual references throughout the music video include Creed, Rocky and Snatch.

(0:14) Narration: Justin Bieber released the video for “Anyone” on New Year’s Day.

(0:21) It stars Zoey Deutch and was directed by Colin Tilley, who has collaborated with Bieber on several visuals, including his recent “Monster” with Shawn Mendes, and “Holy,” featuring Chance The Rapper.

(0:40) Colin Tilley: “Justin and I had a lot of conversations about this concept. We knew it had to take place in the 1960’s. The instrumental and vibe was so nostalgic, it just felt right… Justin wanted to box in it, and it felt right to tell a human story of the real come-up with someone by your side, loving you and supporting through thick and thin. We put together this beautiful story.”

(0:59) Justin Bieber: “I’ve always wanted to do a boxing video, and it made sense for this song being an 80’s power ballad… If you’re not in love, it makes you want to be in love. It’s kind of like The Notebook.”

(1:15) Narration: Zoey and Justin didn’t actually meet until their very first scene together which was this moment, dancing on the beach.

(1:22) Zoey Deutch: “I had to learn how to drive stick shift approximately two minutes before driving very fast alongside him while he ran and raced me. Considering I’m already a terrible driver in a normal car, not a beat up stick shift car; I was a little concerned about Justin’s safety. But we all made it out alive!”

(1:38) Narration: Classic boxing movies such as Creed and Rocky were key references for the video.

(1:43) Both Colin and Justin wanted his character to be as real as possible, so Justin spent two days training with a fight coordinator.

(1:47) Because tattoos weren’t popular in the era the video is portraying, he spent three hours each morning having his ink covered.

(2:44) The orange outfit Zoey is wearing is something she purchased at a vintage store eight years ago and had never worn.

(3:04) This moment was inspired by a scene from the movie Snatch.

(3:22) Colin Tilley: “The past year our friendship had gotten much closer. We see so eye to eye on what we love creatively and are both inspired by a lot of the same stuff. Being able to talk about ideas and bounce things back and forth with no judgement is the best kind of relationship. It’s pure positivity.”

(4:12) Zoey Deutch: “The kiss was one take and the very very last shot of the two day video shoot. And I added the “I love you,” because well, why not?”