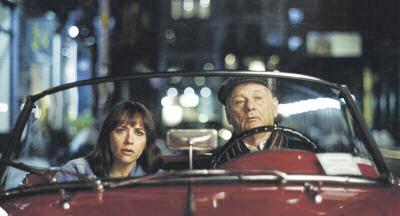 There is nothing rocky about the dramatic comedy “On the Rocks” as comedian/thespian extraordinaire Bill Murray delivers a superb performance as a wealthy, partly retired art dealer with a penchant for the playboy lifestyle. Arguably his best role since 2014’s “St. Vincent,” this marks the third time Murray has teamed up with filmmaker Sofia Coppola – 2015’s “A Very Murray Christmas” and 2003’s “Lost in Translation,” which garnered her an Oscar for Best Original Screenplay. Murray received a Best Actor nomination for that collaboration and deserves another for this one.

In “On the Rocks,” which made its world premiere last September at the New York Film Festival, Laura (Rashida Jones) is a successful yet mild mannered New York novelist who is currently experiencing a severe case of writer’s block. A devoted wife and mother of two young daughters, Laura is often on her own as her husband, Dean (Marlon Wayans) is typically away trying to launch his startup tech company. Troubling signs, like a woman’s travel bag in Dean’s luggage, give Laura pause.

Worried that an increasingly absent Dean could be cheating on her, Laura calls her father, Felix Keane (Murray) for advice. This seems to be a bad idea as we soon learn that Felix, who years ago left Laura’s mother for another woman, believes all men are hard wired in their genetic code to cheat. With all sorts of conspiracy theories, Felix becomes convinced that Dean is having an affair with an assistant despite a lack of concrete evidence. His paranoia, though, feeds into Laura’s concerns and she starts to think her marriage is on the rocks.

Murray is a perfect fit for his somewhat eccentric character who proves to be one of those rare people who can charm almost anyone. His natural delivery and timing is spot-on, and it often feels like his lines are more often improvised than not. The chemistry he shares with Jones is terrific and their scenes are consequently performed effortless ease. This is best magnified during a casual lunch scene and a more dramatic one later involving a serious emotional confrontation. The latter is given a dash of gravitas as Murray throughout the film subtly infuses Felix with a complexity and fragility that lies below his flirtatious, playboy façade.

Perhaps best known for her TV series work on “Parks and Recreation” and “The Office,” Jones holds her own as she delivers a nice, consistent performance throughout the film. Her character’s relationship with Dean could have been explored more thoroughly to help enhance depth to the married couple’s relationship, and therefore a better understanding of their issues. However, “On the Rocks” is much more of a father/daughter story than a husband/wife one. It is one that should not be missed.