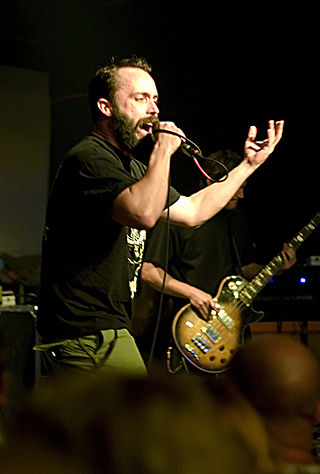 Neil Fallon is the vocalist for the rock band Clutch. The group which has been churning out its own unique brand of riff heavy sludge rock since 1991 just release  a very special, limited edition 16 LP set titled “The Obelisk” As part of wave three of 2020’s Record Store Day . Media Mikes had the chance to talk to Neil recently about the collection, the bands label Weather Maker Music and, the group’s recent series of live stream concert events.

Adam Lawton: Can you tell us about the band’s latest release “The Obelisk”?

Neil Fallon: We had wanted to do something for Record Store Day and things kept getting shifted around and staggered due to the pandemic. What we did was put together a collection of all the full length vinyl releases that Weathermaker Music has put out. We are always getting asked about putting things out such as “Elephant Riders” but we do not own the masters to that stuff. Weathermaker Music is our label and we own all of that material so we can release it however we want. “The Obelisk” is a beast of a collector’s piece which weighs about 12lbs. There are twelve records each symbolized on the cover and that equates to about 16 or 18 discs.

AL: What is the bands process for selecting what will be released on a compilation like this?

NF: You can’t give it all away at once. We know there will be another Record Store Day event next year and we are unsure if we will have new material recorded by then. I think with the collectors mind set you want to make something special that is limited. The limited availability of a piece is what drives that collector to go out and get it. Yes you can go out and get the records individually but you are not going to get the box or some of the other stuff that is included. Some of the stuff included has been really hard to get such as the picture disk for “Earth Rocker”. It’s a hard needle to thread as you want to get this stuff out but you also want to make sure that you are keeping an eye on releasing new material as well.

AL: Has the band always been conscious of saving material for special releases like this?

NF: Every time we write a record we have this conversation. It used to be with a major label you would record 15 songs and only 10 or 12 would make the album. You then had the remaining tracks to use for B sides or whatever. For our last album “Book of Bad Decisions” we recorded 15 songs with the intention of putting 12 on the album and having three other versions of the album going to different areas of the world. We ended up not going that route and just included all 15 (Laughs).

NF: I am not really a vinyl guy. I often just use Spotify to listen to my own music. I am very modern. Then again I do understand the appeal of vinyl. With the pandemic I know vinyl has even taken off more. When it comes to vinyl a label like ours tends to have to get at the back of line for pressing as we generally aren’t pressing 50 thousand copies at a time. I like the tangible qualities of vinyl when in this day and age so many things are non-tangible. I listen to so much music that having to constantly get up to flip and change records is just not something I think I have time for in the day.

AL: The band has also been releasing cover material under the “Weathermaker Series” moniker. Can you tell us a little bit about that group of songs and your plans going forward?

NF: We wanted to see what would happen if we started doing just digital releases. To test that out we started with some re-records and a bunch of cover songs. We weren’t sure if it would piss off our fans or behave different and we didn’t want gamble on it with new material. It’s hard to sell physical records and you have to be very accurate with how much you press. This was sort of a protective play. A lot of those old songs we can play a lot better and I hate to say it but, in between albums you have to stay engaged and let people know you are not dead(Laughs). We would just record a bunch of these and release them every six to eight weeks as a way to bridge the gap between albums. That would have worked had the pandemic not occurred. The plan for all of these is to be put together for a vinyl release and probably CD as well in the near future.

AL: Having been in the music industry since the 1990’s what has been the biggest change in the business to impact the band?

NF: File Sharing. You could wrap that in a bigger box and say the internet as a whole. We enjoyed the patronage of major labels all through the 90’s and our shows were numbering in the hundreds here in the states and a couple dozen overseas at this time. After people started illegally sharing music and getting the word out all of a sudden our shows became much, much bigger. Would we have liked to have been paid for every time someone listened to us? Sure! However those listens get parlayed into someone buying a ticket and then a t-shirt. People then become fans and maybe begin buying merchandise even when you are not on tour. It was a marathon and not a sprint but this was certainly a watershed moment for the band. It was word of mouth on a global scale.

AL: What can you tell us about the bands recent virtual concerts and are there any plans for more in the future?

NF: That was really a baptism by fire. Around the end of March, Early April when it became apparent that touring wasn’t going to be able to happen until the Fall at the very earliest. We had a bunch of festivals booked and like most bands a majority of our income comes from touring and merchandise sales. Yes, we own our own record label but you can only put out so many records and it’s not something you can do every night. There was a little bit of a panic mode as to what we could do but we knew we had the means and where with all to stream via You Tube so we started there. From that our booking agent got us connected with some people at Live From and we learned how to put things together. We didn’t go to a sound stage or use a bunch of cameras we just used Face Time and people seemed to enjoy the do it yourself approach we took. It is weird singing to a camera or laptop and I am very grateful that we had around 7 to 8 thousand people buy tickets. Once this all came together we were able to breathe a sigh of relief in knowing we could bridge the gap between then and whenever we are able to go back out on tour. It’s never going to be as satisfying as smelling an audience (laughs) but with the band all living within close proximity to one another we are able to do these as some bands have members all over which doesn’t allow something like this. As far as a third live stream that’s something we are in the process of scheduling right now.

AL: Going in to your third stream are there things you know ahead of time that you want to change or add that you weren’t able to do with the previous shows?

NF: I think the main thing is trying to make the sets different from one another.  I don’t think people would be too stoked about paying for the same set every time. Thankfully we have a pretty long discography. The last stream we let a fan choose the set which was a fun exercise. I think there is a sweet spot between the DIY and production value side of things as you want to make it better each time you do it but at the same time I think people like a certain amount of grit.

AL: What are the bands plans going into 2021 and where is the best place fans can go to keep up with everything related to the band?

NF: I think come January we have decided not to think about anything other than the next record, with the assumption we can go back out on tour. I’m not sure how sustainable streaming shows are for ones mental health (Laughs). It’s going to be a slow curve to get back to touring but then we can look back and be glad this is behind us. Fan’s can check out Clutch official on Instagram and Twitter. Those are usually our main outlets for showing people what’s going on. If people are looking for merchandise they can check out Clutchmerch.com.