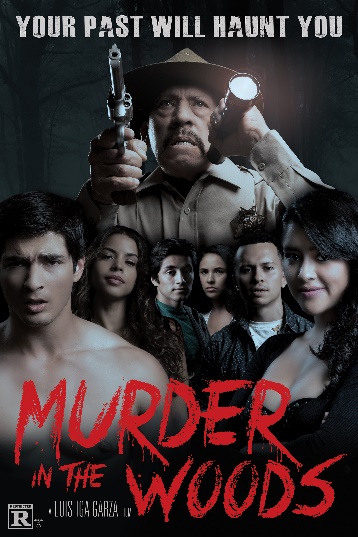 “Murder in the Woods,” from writer/director Luis Iga Garza, pulls a lot of familiar notes together with a Latina influence to deliver a safe but enjoyably brisk slash-y adventure. The film features a cast full of Latino actors intended for mainstream English speaking audiences. The absence of cultural stereotypes is refreshing and, frankly, demanded in 2020. It’s interesting to see how this story pulls cues from, essentially, an entire decade of slasher tropes whilst turning that genre on it’s head.

Pressing forward as audiences increasingly support (and insist on) elevating voices of creators of color it can be assumed that this will become more the norm. That said, I can only help that titles like this will prove to be a gateway for more original storytelling to highlight spooky delights from new ancestral wells. It’s imperative that if this route is important to you that you demand it with your support of projects like this. It may very well be the first American slasher featuring exclusively actors of color and that is very much an achievement of note.

That being said, “Murder in the Woods” is rather aggressively force feeding a large helping of nostalgic nods so your enjoyment of this film is going to be largely dependent on if throwbacks are still your jam or not. Although refreshingly diverse, this circle of youths is here to remind us that, no matter their skin color, entitled suburbanites can only behave so progressively.

The trusted roles of smart virgin, loose popular girl and frat-bros are still going strong here. Spooky local sheriff? They made sure Danny Trejo was strong-armed in for that quota too. So again, if the punishment of badly behaved teens via plentiful gore is still in your wheelhouse then this one is a go for you – and face it, sometimes that’s the comfort food that all horror fans crave. After a stint at drive-ins last month, MURDER is coming to VOD on September 18th and I think this might be a perfect title to recreate the drive-in atmosphere in your backyard via projector if that’s plausible. Some popcorn and an outdoor ambiance with flashlights and friends might be all you need to let this one headline a solid night of jump scares and fun.