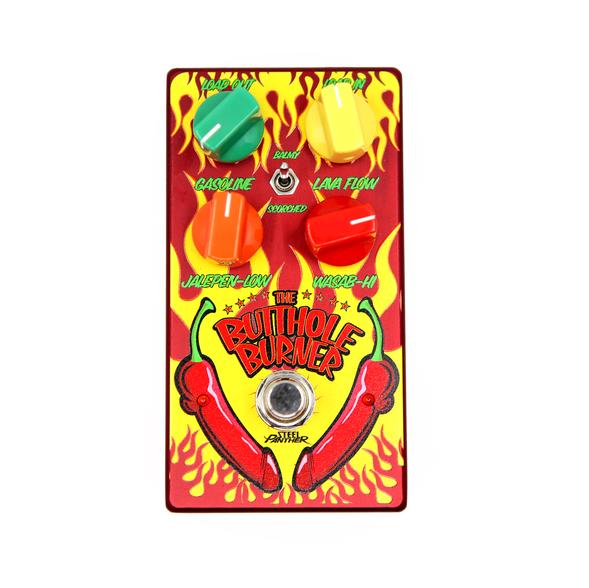 Hot! Spicy! Sexy! And, Feisty! Steel Panther presents the newest edition in its line of signature guitar effects pedals. “The Butthole Burner” distortion pedal will scorch eardrums and backsides with the click of a button.

Limited to one production run, “The Butthole Burner” is a repacking of the controversial “P**** Melter” distortion pedal which was released in 2019. Housed in a brushed red metal casing complete with multi-colored knobs and light up “peppers” the “Burner” is capable of adding an edgy boost to your favorite tone or craft a completely new sound. With two levels of selectable distortion (Scorched and Balmy) and knobs for Jalepen-Low, Wasab-Hi, Gasoline (load out) and Lava Flow (load in) guitarists can quickly dial in a usable sound without having to read a lengthy user manual or take an advanced electronics class. The pedal can be powered by a single 9 volt battery or via a power adapter (not included).

After a couple minutes of turning knobs and changing the micro switch between the two distortion options I found a setting within the Balmy mode that paired nicely with my current distortion. Acting as more of a boost in this situation the “Burner” gave me just enough boost and saturation to make my solo’s stand out above our standard mix. The Scorched setting was a bit more than I needed and at times was a touch shrill however, I am sure there are plenty of players out there who will enjoy the razor like attack when the pedal is cranked to the max in this configuration. One other thing worth mentioning is the switching. Like most high end effect’s pedals the “Burner” features a standard tru-bypass switch. The switch included on my pedal was a bit stiff and required a heavy step for it to fully engage. This threw me off the first couple of times I stepped on it as it did not engage like other pedals but after a direct, heavy downward step on the button the dual red LED’s lit up the pepper graphics and we were on our way to sonic goodness.

If you picked up the first iteration of this pedal “The P**** Melter” and are looking for something with a different sound you will probably  want to skip this pedal as aside from the new aesthetics electronically it is built on the same engine as its predecessor making for little to no difference in tonal variety. If you missed out on the controversial pedals initial release and, have been longing for a pedal that is as visually aggressive as its sound then head over to Steelpantherrocks.com and snag one of the remaining units as it will certainly add some excitement to your guitar sound.