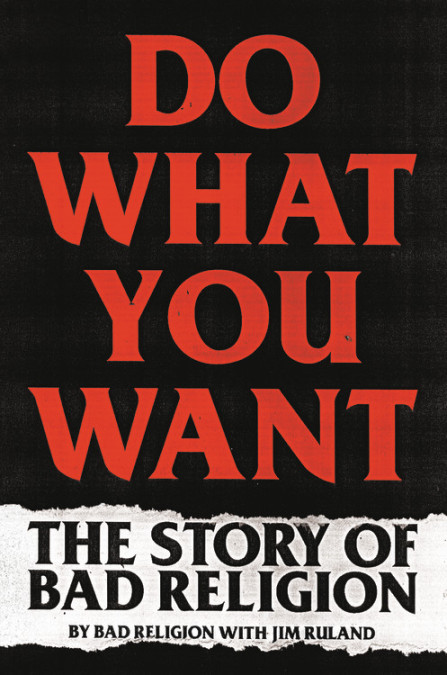 “Do What You Want: The Bad Religion Story”

From their beginnings as teenagers experimenting in a San Fernando Valley garage to headlining major music festivals around the world Bad Religion has been bringing anthemic punk rock to the masses since 1982.  “Do What You Want: The Bad Religion Story” tells the whole story of Bad Religion’s 40-year career in irreverent style and detail.

Over the course of the books 336 pages author Jim Ruland and Bad Religion members Greg Graffin, Jay Bentley, Brian Baker and Brett Gurewitz among others take readers on an explorative narrative of the bands career the likes of which we have never seen nor read. From the earliest meetings of transplanted Wisconsinite Greg Graffin  and his long time song writing partner Brett Gurewitz and on up through the release of the band’s most recent 2019 studio album “Age of Unreason” the book serves as a up to date document which leaves no stone unturned. Personally I enjoyed the chapters recounting the creation of albums like “Suffer”, “Stranger Than Fiction” and the often forgotten “Into The Unknown” an album which we learn was nearly the end of Bad Religion all together. Included amongst the 27 chapters are a collection of photos from all different eras of the bands career along with early show flyers and magazine covers. Needless to say very cool!

“Do What You Want: The Bad Religion Story” is not just another warts and all band biography. Fans of the band will certainly enjoy hearing the full history of the band which until now has never completely been shared. If you are looking for another tale of the cliché sex, drugs and rock n roll then this is not the book for you. Yes those topics are talked about however not to the extent other books of similar format have. Instead the focus (as it should be) is on the members themselves and their sheer determination to make great music. No matter if you are a casual listener or the most diehard BR fan “Do What You Want: The Bad Religion Story” is an enjoyable read which keeps you turning the pages chapter after chapter.