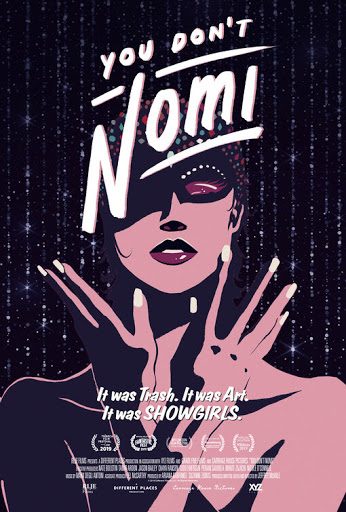 I remember wanting to see “Showgirls” back in 1995 but since it was rated NC-17, I couldn’t get in. I was only 13 years old at the time. But I do remember renting it at Blockbuster once it was on video and I remember falling in love. Yes, I know how bad the movie is but at the same time it is also so good. That is what this documentary, YOU DON’T NOMI, is about. It focuses on the legacy of “Showgirls” and how it has become a cult classic over the last 25 years. Yes, it’s crazy to think that it is 25 years old already.

Even though the main topic of “You Don’t Nomi” is “Showgirls”, the film is also a retrospective of Verhoeven’s directing career from “RoboCop”, “Total Recall”, “Basic Instinct”, “Starship Troopers” and “Elle”, among others. It showcases the themes that unite his films. Verhoeven definitely is a unique director as well as a controversial figure all at the same time. All of Verhoeven’s films have pushed the limits with sexuality and violence.

The documentary is extremely interesting to watch whether you are a fan of “Showgirls” and Verhoeven or not. It features great interviews discusses the fandom around “Showgirls” and how people love this film so much. What is cool about this documentary is that you don’t even need to be a fan of this film to enjoy it. It talks about how people actually have hated it but it grew on them over the years. Whether you believe it or no, this film despite being called trash during it’s release is a piece of art.

“You Don’t Nomi” will be available On Demand and Digital on June 9. I highly recommend checking it out to get an in depth look at the film that was a box office bomb but has since become a huge cult classic.

MediaMikes posted an additional review for the streaming release here!