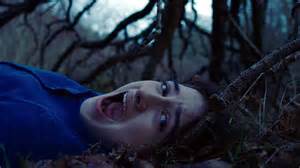 Officially, it is listed as a “drama/horror” film. However, “The Other Lamb,” currently streaming on-demand, is neither dramatic nor horrific. While it does have an interesting concept involving a mysterious cult leader and his all-female flock, “The Other Lamb” misfires on nearly every single level imaginable. In a remote section of forest dwells a small commune of women, ranging in approximate age from eight to thirty-somethings, who are held together by a man only referred to as the Shepherd (Michiel Huisman, “The Age of Adaline”). While doing his best to resemble the Caucasian version of Jesus Christ, the Shepherd exudes an inexplicable magnetism that his multiple wives are captivated by.

There is a noticeable “Handmaids Tale” look to it all with the stark contrast of red and blue uniforms the Shepherd’s wives and daughters are forced wear against the often bleak, natural landscape around them. Unfortunately, “The Other Lamb” does not provide any background for the female characters other than the hint that they were once all “broken” women. Only his daughter, Selah (Raffey Cassidy, “The Killing of a Sacred Deer”) and a wife, Sarah (Denise Gough, “’71”) who has become disillusioned with the Shepherd, are given anything resembling depth. It is akin to looking at a coloring book without any colors filled in.

We also never glean much about the Shepherd either, whether it be his past or how he can wield such control over the women. As a result, there is a psychological dynamic that is missing. All we see is him standing around looking stoic and telling the women how if they behave, they will have his grace, which they scream hysterically over like he was Elvis Presley.

The director, Malgorzata Szumowska (“Mug”) inserts symbolic imagery throughout the film to explain what is going on in Selah’s head as she begins to spiral down into her own rabbit hole. Some of the images are intended as an allusion to Selah becoming a woman, yet, it often comes across as a boring, gimmicky acid trip.

There is a bit of a mystery as to what happens to baby boys born in the Shepherd’s flock, something that is eventually answered in a memorable way as they trek to find a new home in the wilderness. It is also a turning point for Selah as she becomes increasingly revolted by the Shepherd whose actions turn more heinous, including incest.

Overall, “The Other Lamb” is a rambling mess that wanders aimlessly across the screen until it reaches a conclusion that is meant to be unsettling but is unsatisfying.