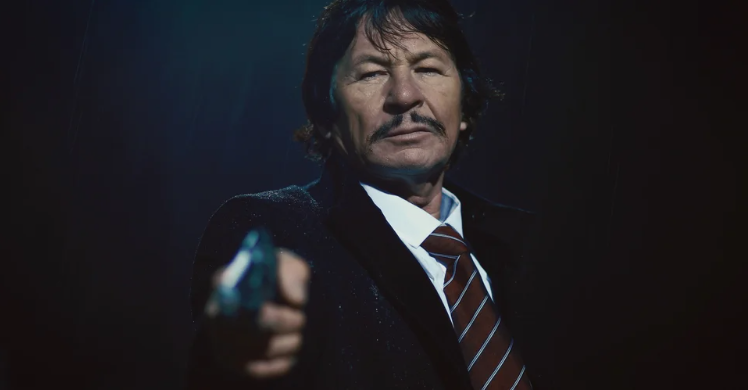 If you passed Robert Bronzi on the street you would definitely do a double take thinking that you have just passed the late actor Charles Bronson. Bronzi has taken Hollywood by storm recently and has starred in films like “Death Kiss”, Once Upon a Time in Deadwood” and most recently the horror film “Cry Havoc”. Media Mikes had a chance to chat with the Bronson doppelganger to discuss his films and likeness to Charles Bronson.

Mike Gencarelli: How does it feel to be called “The Hungarian Charles Bronson”?

Robert Bronzi: In my home town people know me as Robert or Bronzi because that is my stage name. Also, when I’m traveling in the country a lot of people want to take a photo with me, they congratulate me and wish me luck. I have to say it’s a very good feeling.

MG: When did you first get confronted about your likeness to Charles Bronson?

RB: As young man, pretty much  my whole life. So I cut my hair and moustache like Bronson. Many years ago in Hungary I worked as a horse breeder and horse trainer. At the horse breeding center we had a lot of   visitors every day, people told me “hey boy ! you know you look like Charles Bronson? ” I worked with my very good friend Peter, he would always say that I looked like him and he began  to call me Bronzi. So he gave me my nick name . After that everyone called me Bronzi and it became my artist name.

MG: Give us some background on your life before you started making movies in Hollywood?

RB: I’m an actor, musician and stuntman. I have done a lot of different and interesting things in my life. I worked in Hungary as a horse breeder and horse trainer. I performed at western shows in Hungary and Spain in different pieces. I’m an accordionist, I played music in bars, at festivals, weddings and private parties.

MG: Tell us what was it like filming in Western Leone, near Almeria, Spain, which was the site of much of the filming of the famous Sergio Leone/Charles Bronson western ONCE UPON A TIME IN THE WEST?

RB: Well, I really enjoyed filming in Almeria as I worked there for quite a few years in the western village of TEXAS HOLLYWOOD TABERNAS as a stunt performer. There I met some of my acquaintances, my old colleagues, and a few of them are also featured in the film, and my acting partners are also wonderful and talented people. Every time I go to Almeria I feel like if I am going home. I really like that place and Spain too.

MG: How was it going from a revenge western to a horror movie like CRY HAVOC?

RB: My first western style movie was shot some years ago, also with Rene Perez . The name of the film was From Hell To The Wild West .This is a western movie with horror elements. CRY HAVOC is a horror and action movie without western elements. For me that was a new challenge, a new role what I tried to do with my best ability as an actor.

MG: You have worked with director Rene Perez on four films now; tell us about how this collaboration started?

RB: Rene Perez saw my photo on the Saloon wall in Spain in the western village where I worked as a stunt performer. He thought it was a photo of Charles Bronson years  ago hand asked the owner about the photo. When Rene found out it wasn’t Bronson, it was me, he told the owner, “I want to meet this guy”.

MG: I read you train in judo and Muay Thai; tell us about how you keep in shape?

RB: I work hard to keep my body in shape. In Hungary I have some good friends that help me get ready for the movies. They teach me martial arts such as judo and Thai boxing, and three times a week I visit the gym.

MG: What do you do when you are not acting?

RB: I have got some preferred hobbies. For example: Riding, archery, fishing, playing on my accordion and walking in the forest. I would also like to mention that I ‘m a member of a traditional preservation team in Hungary. When I have time I go with them to attend the traditional festivals where I use my sword, my replica firearms and of course my bow in the live show. Also I have different costumes from the very old times.

MG: What films do you have planned upcoming after CRY HAVOC?

RB: Currently I’m working on a few new projects. I can’t say much but in the near future you will see a lot of Bronzi action films .