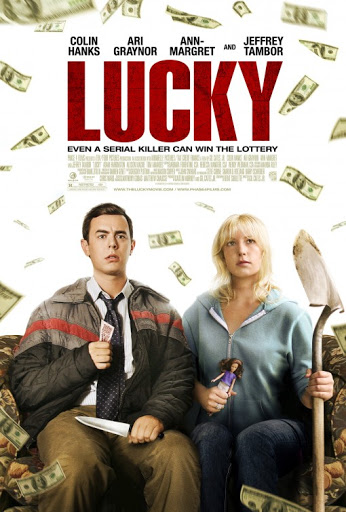 Today is Thursday and it is the start of our Throwback Thursday interview revisits. For our first Thursday, we are going back in time to July 2011, nearly 9 years ago, when we interview Colin Hanks, of course the son of well-known actor Tom Hanks. Colin was starring in the Gil Cates Jr. directed film “LUCKY” along with Ari Graynor, Ann-Margret and Jeffrey Tambor at the time and we were lucky (see what I did there LOL) enough to get an interview with him.

This interview was done back in 2011 when we were still named MovieMikes.com with our own Jon Donahue, who had a KILLER conversation with Colin Hanks to discuss “LUCKY”, his Tower Records documentary and his role on Showtime’s “DEXTER”! Please take the time to watch this whole interview its hysterical and deserves a view. And in case you wanna know…Yes they already knew each other prior to the interview. Enjoy and leave comments!!

Here is the premise for the film:
After Ben (Hanks) wins $36 million in the lottery, Lucy (Graynor) marries him, strictly for the cash. Just as she’s beginning to have genuine feelings for him, however, Lucy discovers that he’s a serial killer whose victims all resemble her. Still, though, there’s no way she’s walking away from those lottery checks, even if it means losing her mind and re-burying all the bodies.