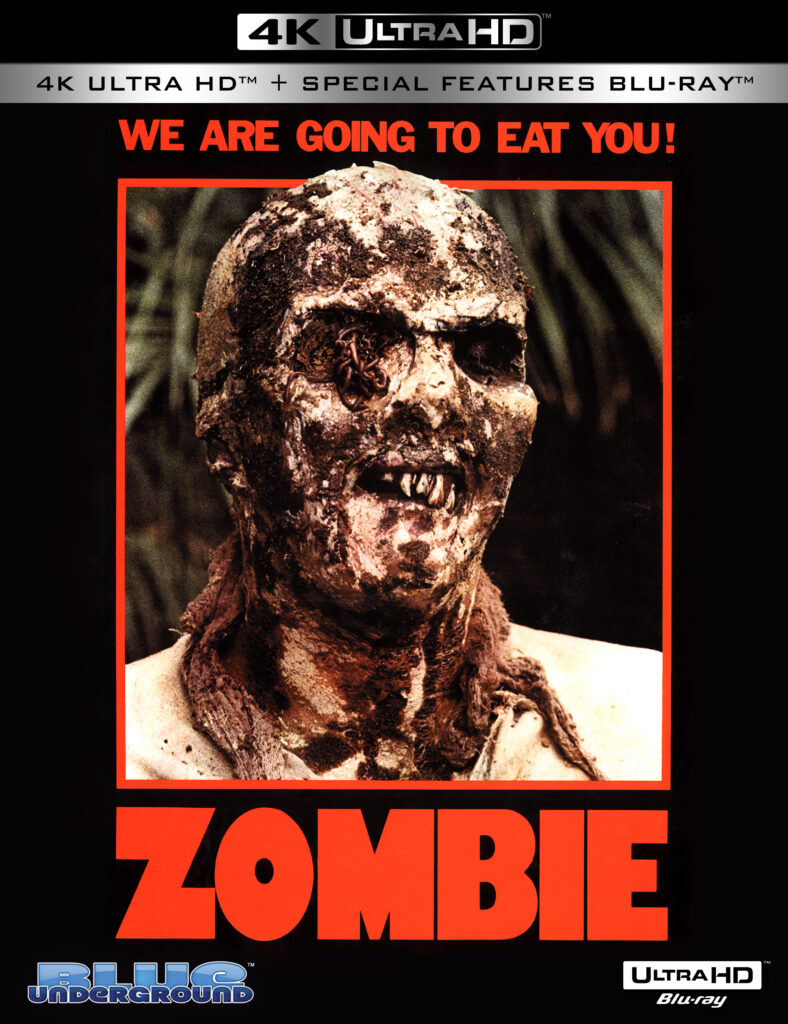 The Dead Are Among Us on 4K Ultra HD Blu-ray!

In Italy, it was considered the ‘unofficial sequel’ to DAWN OF THE DEAD. In England, it was known as ZOMBIE FLESH EATERS and banned as obscene. In America, it was called ZOMBIE and advertised with the depraved tag line “WE ARE GOING TO EAT YOU!” Tisa Farrow (THE GRIM REAPER), Ian McCulloch (CONTAMINATION), Al Cliver (CANNIBALS), and Richard Johnson (THE HAUNTING) star in this worldwide splatter sensation directed by ‘Maestro Of Gore’ Lucio Fulci (THE HOUSE BY THE CEMETERY, THE NEW YORK RIPPER) that remains one of the most eye-skewering, skin-ripping, gore-gushingly graphic horror hits of all time!

ZOMBIE (3-Disc Limited Edition) Blu-ray Reviews:
• “5 out of 5! The release is sourced from an exclusive new 4K restoration that is simply a thing of beauty. I think that it is the best work that the folks at Blue Underground have done to date… All in all, there is absolutely no doubt in my mind that the folks at Blue Underground have produced the definitive master and release of ZOMBIE. VERY HIGHLY RECOMMENDED!” – Blu-ray.com
• “Blue Underground has delivered the definitive home video release of ZOMBIE… It’s difficult to imagine this 4K remaster and three-disc limited edition ever being dethroned… One of the most extraordinary cult cinema packages I’ve ever come across. I haven’t awarded this site’s highest rating to a title in more than two years, but Blue Underground’s astonishing efforts here are richly deserving. DVD Talk Collector Series” – DVD Talk
• “ZOMBIE is a spaghetti splatter cornerstone that looks better than ever in Blue Underground’s new 4K restoration—one of the few absolute ‘must-own’ releases for horror fans this year!” – Rue Morgue
• “Fulci gets so many elements of this film right – atmosphere, gore, story, decent characterization. This is Criterion-level treatment, and in some ways even more impressive. Undoubtedly, some of the best work Blue Underground has ever done, and if you’re familiar with their transfers that’s saying a lot. This is a no-brainer pick as one of the year’s best home video releases!” – Dread Central
• “Blue Underground’s work on this title blew all of my expectations out of the water – the transfer truly is a revelation. After years of seeing this film in substandard quality, it’s a shock to see it in such pristine quality – almost as if it was shot yesterday. Add to that a large extras selection and you have one of the finest Blu-ray horror releases of the year. Beyond recommended!” – The Digital Bits