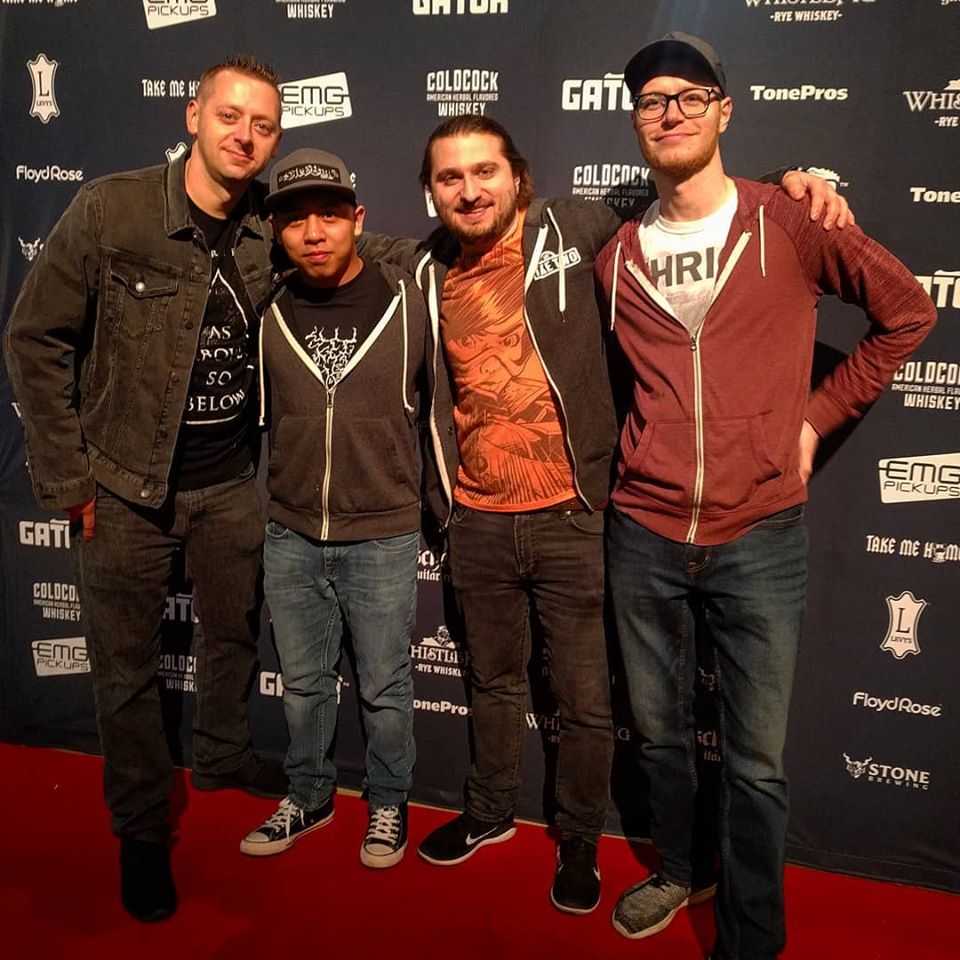 Take Two have been performing in and around the Tri-State area since the groups formation in 2012. The four piece band who lists Corning, NY as their home-base bring a unique mix of sounds and styles to the pop-punk genre which they associate themselves with. The group’s latest release “We Aren’t Big” is set for release on March 13th and Media Mikes had the chance to speak with bands guitarist Adam Lawton about the band, the new release and making the transition to a heavier sound.

Ryan Albro: What can you tell us about Take Two?

Adam Lawton: The band is made up of Josh Cavaluzzi, AJ Kish, Nick Murray and I. The original line up of the band formed in 2012 while some the guys were going to college together in Upstate New York. After a short time they were looking for new guitarist and that’s when I joined the band. We put out our self-titled debut shortly after.  Around that same time we got hooked up with the Cold Cock Whiskey artist program which allowed us to connect with a bunch of other bands and play some new places around NY, NJ and PA. After a couple more lineup changes including Josh moving from drums to vocals and downsizing to a four piece we released two EP’s (Weekend Warriors and Natures Chicken) Through the release of those and connections we made we joined the Dirtbag Clothing Artist program and also started working with ACE Products Group both of which have been amazing! Because of them we were able attend our first winter and summer NAMM shows which took us to Los Angeles and Nashville. Now on March 13th we are set to release a brand new album titled “We Aren’t Big”

RA: Can you give us some background on the new album We Aren’t Big?

AL: “We Aren’t Big” is the bands 4th studio release. It consists of 9 tracks four of which are brand new. The other five come from two previously released EP’s (Weekend Warriors and Natures Chicken). We re-recorded those with the current lineup of the band

RA: What was the inspiration for the album’s title?

AL: (Laughs) that started out as a joke between the guys in the band. We were on our way to a show one day and we stopped for some food. A couple of us had already ordered when the cashier asked our singer Josh if we were in a band. He replied “Yes, but we aren’t big”. Of course we all lost it and we were like “what do you mean we aren’t big!?” We are huge in our own minds. (Laughs) So since that day we all would joke with each other about being a band but it’s not big. When it came time to decide on an album name that one liner came up and it instantly stuck.

RA: Which songs are you most proud of from We Aren’t Big?

AL: We worked hard on all the songs so to pick just one or two is kind of tough. When you are putting these things together you get really attached to certain parts as you spend a lot of time playing them over and over to get them just right. For instance the breakdown in “Fall”, the verses of “Burner” and the solo of “Lock Up” are ones that stick out for me and fun to play.

RA: What were your inspirations to blend metal and punk on the album?

AL: That was something that happened organically over time. Each time there was a lineup change we tweaked our sound a little bit. We have had this same line up now for quite some time and we are all into various forms of heavy music along with punk. One of the first new songs we had was “Burner” and being that song is fairly aggressive we figured that the other new songs we were going to include with it should follow suit.

RA: What are your thoughts on current influences in the punk genre?

AL: I think if you look at punk over the years it’s a genre that is always evolving and expanding. “Punk” is such a broad term now and there are just so many sub-genres of punk like Folk-Punk, Afro-Punk, Celtic-Punk you name it. I think punk is more of an idea or thought process in that you are doing something different than what is considered the “norm” at that time. You can be “punk” without looking or sounding any one specific way and that’s really cool.

RA: What are Take Two’s upcoming touring plans and what’s next for the band?

AL: Coming up on March 14th we will be playing in Buffalo, NY with a bunch of great acts from up there. Being it’s the day after the record comes out we have decided to stream our set via facebook.com/official.taketwo starting at 8:30pme EST. We thought that would be cool way for more people to be able to check out the show and hear the new music in a live setting. From there we will be appearing at this year’s Launch Music Conference in Lancaster, PA. We will be making the rounds that weekend and promoting a song of ours that is featured on the Conference compilation record which they put out each year. Another cool thing we have coming out is we got hooked up with Phameless Records from Philadelphia and have a song appearing on a compilation they have put together so that’s going to be really cool as well. Aside from all of that we have shows booked through the fall around NY and PA and are always looking to add more whenever we can.

For more information on TAKE TWO and to get a copy of “We Aren’t Big” visit the bands official web page at www.officialtaketwo.com