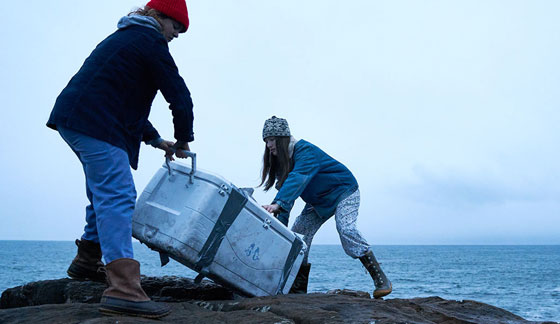 With a title borrowed from a classic English sea shanty, “Blow the Man Down” is an average, yet entertaining mystery/drama with a multitude of secrets that emanates a “Fargo”-like vibe. First-time feature length directors Bridget Savage Cole and Danielle Krudy, who also co-wrote the film that debuted on Amazon Prime, have crafted a smooth-paced work of cinema with a few flashes of well-timed suspense.

Set in the small, picturesque fishing village of Easter Cove, Maine, “Blow the Man Down” begins with the Catholic wake of one Mary Margaret Connolly. Her two daughters – Priscilla (Sophie Lowe, “The Beautiful Lie”) and Mary Beth (Morgan Saylor, “Homeland”) – are naturally saddened by the loss of their mother, whom they had to care for in recent times. The girls, though, seem surprised to hear tales from their mother’s three closest friends – Susie Gallagher (Academy Award nominee June Squibb, “Nebraska”), Gail Maguire (Academy Award nominee Annette O’Toole, “A Mighty Wind”) and Doreen Burke (Marceline Hugot, “The Messenger”) – of how Mary had saved their bacon on several occasions.

Interspersed within this sadness is a scene in which a nameless woman frantically jumps out of a car and runs screaming from an angry man who eventually tackles her. All the while a woman we come to know as Enid Nora Devlin (Margo Martindale, “August: Osage County”) watches silently from a second story window. We get the sense she may approve of the violence that is transpiring and thus has no interest in helping the woman. It’s brief but it’s an important nugget of things to come.

Back at Mary’s house, the younger Mary Beth is dismayed to learn from Priscilla that their mother has left them with nothing. Mary Beth leaves in an explosion of anger and ends up at a dive bar where she latches onto a man who proves to be far more dangerous than she had ever considered. This is followed by a killing and cover-up that leads the sisters down a rabbit hole of secrets and lies involving prostitution, bribery, murder and a police force that either looks the other way or is incompetent.

Even with a solid story, “Blow the Man Down” does contain some mystery clichés so don’t expect anything fresh when watching it. Additionally, the two leads are fine enough in their roles, but they are overshadowed greatly by the much older, supporting female cast. Squibb, O’Toole and Hugot are a hoot as a trio and they excel at making us feel like there is something more to their characters without giving too much away too quickly.

Overall, the real star is Martindale who is simply a delight to watch. A woman with a ton of secrets and a hardened, mean streak a mile wide and a mile deep, Enid is someone that proves to be a perfect antagonist. Martindale also infuses her character with a level of complexity that the other cast members are not quite able to achieve.

Call it a poor man’s version of “Knives Out,” “Blow the Man Down” is a nice way to spend 90 minutes in front of a screen at home.