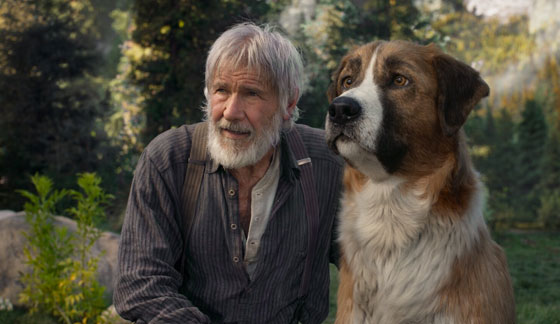 The 1903 novel “The Call of the Wild” by American novelist John “Jack” London (1876-1916) was written after the author had spent nearly a year in the wilds of the Canadian Yukon. It is arguably his most popular work and has been adapted to film several times – a silent film in 1923 followed by a 1935 version starring Clark Gable and Loretta Young, and numerous others since. Its indelible mark on American literature cannot be discounted as Hollywood has yet again decided to release another silver screen adaptation. Directed by Chris Sanders (“The Croods,” “How to Train Your Dragon”) and starring Harrison Ford, this newest incarnation is a dullish version of London’s classic tale. It’s tragic because the original story is full of harrowing adventure and timeless themes. However, its clear that Sanders and 20th Century Studios, formerly 20th Century Fox, wanted to make a more politically correct and kid-friendly story.

Set in 1897, we meet Buck, a 140-pound St. Bernard-Scotch Collie mix, at the Santa Clara Valley home of one Judge Miller (Bradley Whitford). A highly intelligent, happy-go-lucky pet, Buck has a knack for getting himself into trouble. It’s all nice and cute and feels like a Disney movie at this point, but what becomes annoying perpetually forward is that Buck is a CGI creation, and a poor one at that. It gives the film a phony quality, but of course it might have caused too much controversy if a real dog had been used instead. Be that as it may, after one trouble-filled occasion, Buck is forced to stay the night on the porch, which proves to be a fateful decision by Judge Miller. A nefarious local steals Buck for the money he will receive from those looking for good sled dogs in the Yukon.

After learning the law of the club, Buck is purchased by a mail deliverer and his assistant who need a new dog for their sled team. (Amidst this, Buck has his first encounter with John Thornton (Harrison Ford), a man with a wounded soul looking to disappear into the northern wilderness.) Gradually, Buck, guided by a black wolf that represents his inner call to the wild, learns to be a part of a pack, but he ends up butting heads with the team’s menacing sled leader, Spitz for leadership. This conflict, for example, has been watered-down to the point it fails to reflect the struggles of nature that London related in his work. However, it’s par for the course as London’s original, brilliant story is repeatedly gutted.

Eventually, Buck acquires yet another new master, but this one is cruel, naïve and blinded by gold lust. When Buck is worked nearly to death, it is Thornton who saves him and takes him in. Perpetually mourning the loss of his son, Thornton answers a call to adventure and sets out with Buck to find the wildest place they can. Once there, Buck is put in a position to decide if he wants to stay in the world of man or answer his ancestral calling. The real calling, though, that everyone should answer is stay away from this movie. Instead, pick up London’s book, or download it, and read it for yourself. You’ll be glad you did.

2 Replies to “Film Review: “The Call of the Wild””