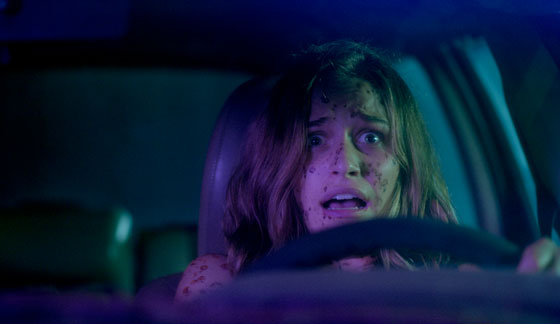 For a moment if you could, look at two different subgenres; horror anthologies and horror parodies. There are some strong candidates in each category. For anthologies, you got “Creepshow” and “Trick R Treat.” For parodies, you got “Scary Movie” and “Tucker and Dale vs. Evil.” I know I’m leaving a few movies out of the categories, but there’s a reason I want you to think about these two. How difficult do you think it is to combine them? I know what some of you are thinking. “Cabin in the Woods.” But what if a horror anthology parody film even subverted that?

I know my opening salvo promises grand things, but for most horror aficionados, I promise that you’ll love “Scare Package.” Very rarely do I want to immediately rewatch an anthology film or parody after leaving the theater, so this is a rare occasion for me. The main reason is that anthologies stay out their welcome and parodies require an audience to soak up the hit or miss laughs. “Scare Package” is the kind of film that’s prime for an audience, but will certainly make most people sitting at home alone smirk at its mocking nature.

The one thing that makes “Scare Package” work, is Aaron B. Koontz, the man in charge of the wrap-around story, as well as the overall product. One caveat that Koontz revealed at Panic Fest, which this movie was screened at, was that he allowed creative freedom to all other directors and writers, while providing oversight. He wasn’t a guiding hand, but he certain was able to cherry pick the scripts that best fit his overall vision. It’s a delicate balancing act, which pays off in dividends. While some shorts in the anthology fit the ridiculing nature, other shorts don’t sneer as much, but still pay homage to an idea or manage to riff on a pop-culture idea.

I’d really like to dive into the individual shorts, but I’d feel it’s unfair and that I’d fall into the stereotype of reviewing anthology films; breaking each one down, outlining strengths and weaknesses while revealing which ones I favored. For a movie like “V/H/S,” I’d find that as a completely fair form of critique, but for “Scare Package,” it feels unfair. While a film like “V/H/S” is so scattershot, “Scare Package” is a, not to sound cliché, complete package. Everything is so fluid, you sometimes forget you’re watching an anthology.

The one thing “Scare Package” avoids is length. Sometimes these movies linger too long, even if the shorts and movie as a whole are good. A movie like “ABCs of Death” can work, but you find yourself fast forwarding on rewatches. With “Scare Package” you’ll undoubtedly find yourself finding some new nod or wink every time. The movie as a whole, and each individual short, serve as little bows to the ideas and genres that they parody. But like I said at the beginning, it also parodies “Cabin in the Woods,” which is becoming a genre on its own, where characters knowingly acknowledge or reference the tropes of the genre that are currently on display. It’s a difficult feat to pull off, but Koontz does it well, without disregarding the merits of the idea altogether.

“Scare Package” not only serves as a blueprint for future horror anthology parodies, but a blueprint for anthologies and parodies. It’ll make horror fans roar with laughter, and for those who aren’t into scary flicks, they’ll find fun in all the pokes and prods at the films they can’t stomach. I enjoy the fact that the horror community enjoys comedy, even when it’s directed at themselves. “Scare Package” is damn near a revelation, especially considering that one of the modern lovers of horror/shock films, Joe Bob Briggs himself, arrives on scene. “Scare Package” pulls out all the stops to make the audience laugh and grin. Koontz talked about the makings of a sequel, with a promise that it’ll parody sequels. I look forward to the promise, and the possibility of a franchise that’ll inevitably parody franchises, remakes, and nostalgia culture.