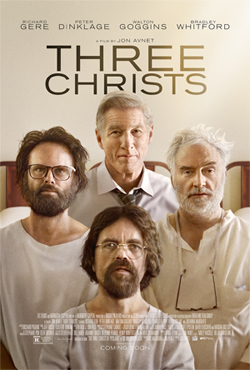 When you think of great films with mental hospitals as the setting, indelible titles such as 1975’s “One Flew Over the Cuckoo’s Nest” or 1990’s “Awakenings” probably come to mind. With a similar backdrop, the drama “Three Christs,” starring Richard Gere, boldly attempts to delve into the realm of paranoid schizophrenia by exploring a time when pre-fontal lobotomies, insulin-induced comas, and electroshock therapies were standard treatments. Directed by John Avnet (“Fried Green Tomatoes”), “Three Christs” alas fails to achieve any level of greatness as it is saturated with terrible melodrama and an overall lack of emotional connectivity.

An adaptation of the 1964 psychiatric case study “The Three Christs of Ypsilanti” by psychologist Milton Rokeach, “Three Christs” takes us back to December 1960 when a bruised Dr. Alan Stone (Gere) is recording a defense of himself against accusations leveled at him by a disciplinary board. It’s a nice hook as it gives off a sense of mystery. We are soon taken back to the beginning during the summer of 1959 when he arrives at the Ypsilanti State Hospital.

Having left a prolific teaching and writing career to pursue a study of delusional patients, Dr. Stone, with the help of his new assistant Becky (Charlotte Hope, “The Theory of Everything”), finds three men who all claim to be Jesus Christ. Joseph (Peter Dinklage), Leon (Walton Goggins) and Clyde (Bradley Whitford) are tragic figures with sad pasts. Each has been diagnosed as paranoid schizophrenics and left to essentially rot in near-barbaric conditions.

With the encouragement of his wife (Julianna Marguiles), Dr. Stone challenges his peers and a reluctant hospital head by using more modern methods that don’t involve inflicting pain. The irony is that he is treating three men collectively who believe they are Christ while he himself does not believe in organized religion. Gradually he makes progress, but countless roadblocks make it a treacherous path.

Despite having a solid cast, “Three Christs” falls flat on nearly every level imaginable. The story is without any unique qualities as it feels like any other run-of-the-mill medical drama. Its characters are nothing special and Gere seems to just rely upon every facial gesture he has ever used in his past films instead of pushing for something more. The pacing is sluggish, and the plot is predictable. Gere is also not believable as the father to two young, pre-teen daughters considering he was roughly 67 years old at the time of filming. Furthermore, we are supposed to believe Dr. Stone fought in WWII and Korea. Assuming his character matches his age, then Dr. Stone would have been 59 or 60 while fighting on the front lines against North Korea. Uh, no. Of course, to be fair I should mention the rest of the cast, which can be covered in one statement – every actor is so over-the-top with their performances you have to wonder how on earth the film ever got released, much less contemplate if Avnet should ever direct again.

In the end, “Three Christs” is a strikeout.