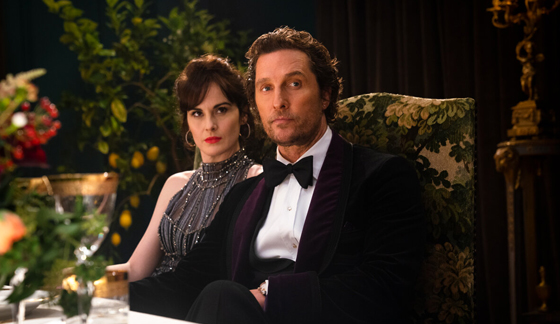 There’s little that’s gentlemanly about the sordid cast of characters in director Guy Ritchie’s new action crime thriller “The Gentlemen.” However, there is plenty to enjoy in this wonderful caper that’s brimming with sharp dialogue, a delicious plot and a few laughs along the way. It is certainly Ritchie’s best effort since 2011’s “Sherlock Holmes: A Game of Shadows” and is only surpassed by 2000’s “Snatch” as his greatest overall work. With a talented, all-star ensemble cast, and a terrific hook at the start, Ritchie takes us on an exciting, twisting journey that’s certainly not for the kiddos.

From an impoverished childhood in the United States, Mickey Pearson (Matthew McConaughey) rose above his situation to earn a Rhodes Scholarship to England’s esteemed Oxford University. Instead of becoming a law-abiding scholar, Mickey saw the monetary potential in selling marijuana to his fellow students. Those humble beginnings led Mickey, often through violent means, to build a multi-million-dollar illegal empire. Despite the power, and prestige he commands, Mickey has grown tired of the game and wants out to spend time with his beloved, yet equally criminal wife, Rosalind (Michelle Dockery, “Downton Abbey”), for whom he will do anything.

Much of this background information is told to us during an extended, elaborate conversation between an unsavory, thick-accented private investigator named Fletcher (scene stealer Hugh Grant), who’s been hired by a jilted tabloid editor snubbed in public by Mickey, and Mickey’s righthand enforcer, Ray (played with subdued rage by Charlie Hunnam, “Sons of Anarchy”). For his efforts, which he has typed up in a screenplay form, Fletcher wants 20 million British pounds to keep his scoop silent.

Meanwhile, Mickey finds a potential buyer for his empire, but there is a concern that this will show competitors that he has become weak. Blood is spilled in the water when one of Mickey’s illegal sites is robbed by a group of young, social media savvy thugs led by a man known simply as Coach (Colin Farrell). The plot only thickens with the introduction of overly ambitious, young Chinese mobster Dry Eye (Henry Golding, “Crazy Rich Asians”) and the accidental death of a Russian mobster’s son.

McConaughey is perfect for this role. Of course, he is quite adept at playing it cool, calm and collected, as demonstrated in a variety of his previous performances. What makes this more notable is the vengeful side he fleshes out while playing Mickey. It’s something we don’t normally see from him and he is brilliant at unleashing the lion in “The Gentlemen.” For their parts, Golding is a nice surprise as a villain and Farrell is marvelously entertaining, harkening back to Brad Pitt’s unintelligible performance in “Snatch.”

Written by Ritchie, the plot is chock full of twists and surprises that keep one glue to the silver screen, waiting on edge as to what is going to happen next. There are some laughs amidst the violence, which is brutal enough, along with adult-oriented lingo, to make “The Gentlemen” non-kid friendly. Ritchie’s pacing is just as quick as the dialogue with nary a dull moment. In the end, “The Gentlemen” is a jolly good time and the best release of the new year thus far!