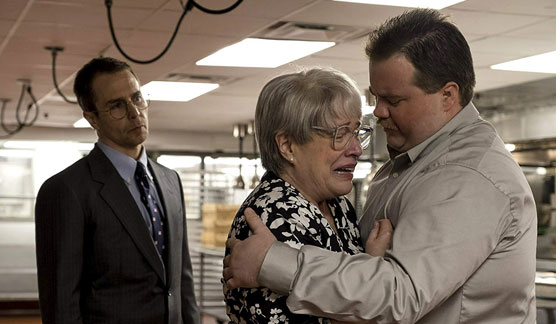 Richard Jewell. I cannot help but wonder how many Americans recognize the name and the heroic actions associated with it. Better yet, who can recall how Jewell’s heroism during the 1996 Olympic Games in Atlanta, Georgia was tragically stained by an assumption of guilt by the FBI and the news media, which subsequently caused millions to believe he was a domestic terrorist. Thankfully, someone in the form of iconic, Oscar-winning filmmaker Clint Eastwood did not forget and has now made a poignant drama that pays tribute to a simple man who saved dozens of lives one hot summer night.

It’s 1986 in Atlanta where Richard Jewell (Paul Walter Hauser, “BlacKkKlansman”) has just started work as a mailroom employee at a law firm. Portrayed as respectful and observant with a dose of simple-mindedness, Jewell catches the eye of attorney Watson Bryant (Oscar-winner Sam Rockwell). A pivotal friendship develops between them with long-term consequences and when Jewell announces that he is leaving to become a security guard, a first step in what he dreams will become a career in law enforcement, Watson, a bit of crusader, warns him to not let the badge go to his head.

Flash forward ten years later where Jewell, who lives with his doting mother, Bobi (Oscar-winner Kathy Bates), is fired from his job as a college campus security guard after a series of events that include him unlawfully pulling over students on the road as they return to school grounds. Having previously been dismissed as county sheriff’s deputy, it would seem likely that Jewell would have a hard time getting another security guard job. However, with the arrival of the Olympics in Atlanta, bodies are needed, so Jewell, almost delusional about being a member of law enforcement, gets another chance to patrol Centennial Park.

No one takes Jewell seriously, that is until he finds a suspicious backpack filled with pipe bombs. Two people do perish as a result of the subsequent explosion and dozens are wounded, but it would have been much worse without his actions in a pre-9/11 world that wasn’t quite as vigilant. Jewell is hailed as a hero, but he is quickly labeled as a villain by fictional FBI agent Tom Shaw (Jon Hamm in a one-dimensional performance), a man desperate to get vengeance, and newspaper reporter Kathy Scruggs (played with over-the-top acting by Olivia Wilde), an unscrupulous and brash journalist willing to do anything to get a headline, even if it means destroying Jewell’s life in the process.

One of the most sacred principles of our judicial system is the presumption of innocence. That all persons are presumed innocent until proven guilty. “Richard Jewell” reminds us all just how terribly wrong things can go when that fundamental adage can be so easily forgotten by a rush to judgment fueled by motives that are less than noble. Although Jewell was exonerated, his case remains a stain on our nation’s history. While Eastwood’s effort does not rise to the level of cinematic achievement as some of his other later works, such as “Gran Torino,” it is still a solid film that successfully plays the emotional heartstrings. Rockwell is a joy to watch, but the breakout star is Hauser. On the surface, his portrayal of Jewell appears too simplistic. However, as the film flows along, his performance reveals itself to be far more complex and impactful than what we first realize. By the end, his role makes you so invested in the story that it will stick with you long after the curtains close.

Overall, Eastwood and Hauser are successful in accomplishing at least one thing – making us remember who real heroes are.