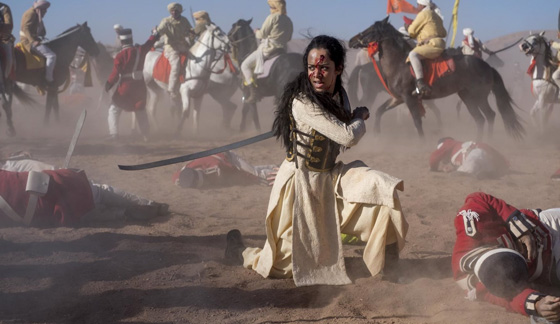 Held in as high regard in India as Joan of Arc in France, Rani Lakshmibai (1828-58) became a heroic martyr during the 1857 Indian Rebellion against the despotic British East India Company. While the British were successful in putting the revolt down, it placed India on a 90-year path to independence and Rani’s actions served as an inspiration then and now to generations of Indians. “The Warrior Queen of Jhansi” is based upon Rani’s story of rising from being a commoner to leading an army against the world’s lone superpower of the day. Sadly, this heavy-handed historical drama is not a fitting tribute to Rani’s legend as it fails to generate any sense of suspense; its acting and direction is stilted; its dialogue is often cliché; and it plays loose and fast with the facts.

Our heroine of the story narrates some historical background at the beginning by telling how she was born on the banks of the Ganges River. Rani (Devika Bhise, “Mosaic”) then vaguely describes how the British East India Company gradually seized more and more power in India over the decades. The story then flashes through her early years like a streak of lightning complete with nauseatingly stiff dialogue. If you don’t blink, you learn that as a teenager, Rani married the ruler of the state of Jhansi. After a son dies in infancy, the couple adopts a nephew as their own to become the male heir.

In the meantime, Indian soldiers forced to serve the British East India Company revolt in vengeful fashion after their rifle Enfield cartridges are coated in pig fat, an insult to both Muslims and Hindus. Back in England, Queen Victoria (Jodhi May, “Defiance”), with her Indian Muslim advisor by her side, the story of which was detailed in 2017’s “Victoria & Abdul,” wants cooler heads to prevail while her British advisor (Derek Jacobi) is consumed with hubris and is quick to crush the revolt with brutal force. This is a problem because the British army in Jhansi, commanded by experienced officer Sir Hugh Rose (Rupert Everett) but ordered around by East India Company representative Sir Robert Hamilton (Nathaniel Parker, “The Perfect Host”), has become bogged down by cholera.

Now a widow, Rani trains her people how to use swords, bows, running obstacle courses, and fighting from horseback. Since any real backstory is nonexistent and there is a lack of character development, it is incomprehensible, without any explanation, that Rani is suddenly an expert military trainer and commander. There are a couple of vague references to her combat experience later, but that is perfunctory at best. Moreover, the discombobulated story continually skips across time while Rani’s adopted son seems to never age. It all comes across as ridiculous and unbelievable without any emotional impact on the viewer besides confusion and boredom.

Eventually, Rose’s force attacks Rani’s well-fortified palace in Jhansi and the ensuing action resembles the often silly, overly exaggerated fight sequences from the brilliant comedy “Monty Python and the Holy Grail.” It goes without saying that there is no real suspense to the final battle scene, which is poorly choreographed and not representative of historical events. It doesn’t help that in the buildup there are sappy lines like, “She’s an idea. And ideas cannot be captured or owned. She belongs to her people, and not the East India Company.”

Rani of Jhansi was a hero for the ages, but this film about her life should be shot off into space and lost to the ages.