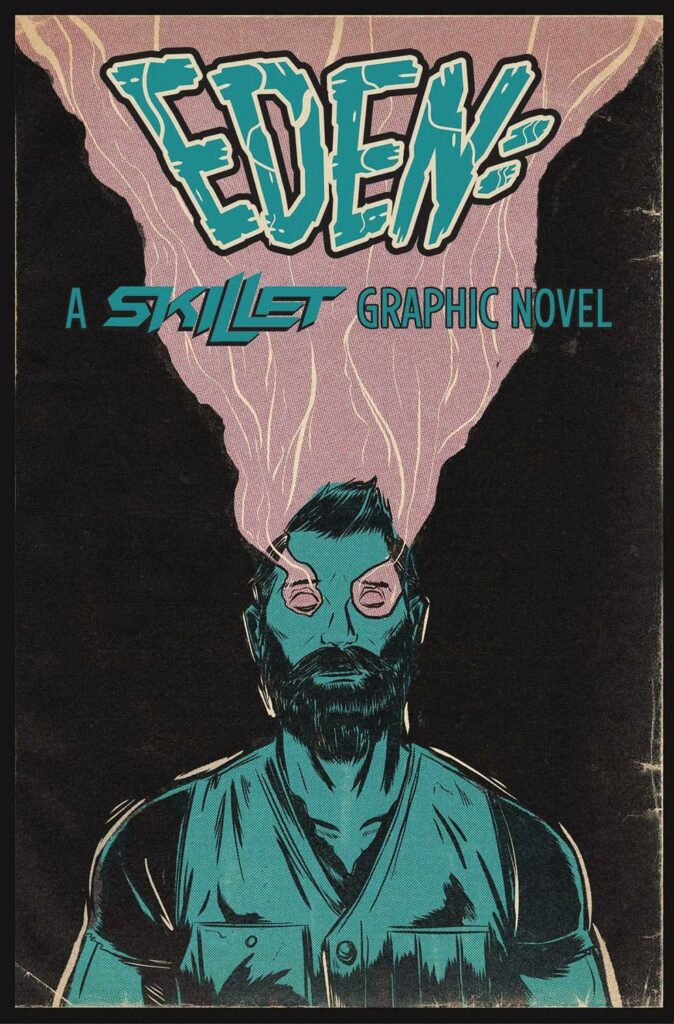 John Cooper is the vocalist/bassist for the Platinum selling rock group Skillet. The band recently partnered with Z2 Comics to release their first graphic novel titled “Eden”. Media Mikes caught up with John and the band at New York Comic Con to discuss the creation of the book, its similarities to the group’s music and if there will be books to come in the future.

Adam Lawton: Can you tell us a little bit about the bands new comic “Eden”?

John Cooper: I love comics and they are something I grew up with. I have always looked at Skillet as sort of a theatrical band. When I say theatrical I am meaning more from an operatic feel than that of a visual feel like Kiss or Alice Cooper. I had always envisioned doing a comic book as I see us all as characters. I had sort of put it off because if it’s not done right it can become terribly cheesy. On social media I am always posting about comics and I ended up getting a call from Z2 Comics asking if I would be interested in doing a graphic novel. I told them yes and that I had some story ideas but I wasn’t sure where to begin. They said that’s ok as they had some ideas of their own. I wanted to do something that was more science fiction as opposed to hero driven. I was looking for something with a post-apocalyptic feel but with a message of hope. That’s something you don’t see a lot. The book has sci-fi and super-natural elements mixed in with some religious undertones. In my view I think all great science-fiction have religious elements. When I say “religious” I’m not necessarily meaning Christianity but just religious. Films like “Dune”, “Blade Runner” and “Battlestar Galactica” are solid examples of that.

AL: How much collaboration went into the book?

JC: I brought the theme of a dying world filled with people all having the same dream which is leading them to paradise. I worked with some really great writers who helped me put together all the different ideas I had. Sadly the idea of the glowing eyes was not my idea but one I really liked as it was sort of an homage to “Dune” which is one of my all time favorite books.

Ian Lawton: What did the rest of the band think about the comic?

JC: The band loves the comic. At first I think they weren’t too sure what to expect. My wife Corey knew what I was going for as she knows me really well. I think it’s hard for people to understand what’s in your head when you are creating something. Once the book was done I think they were a little shocked as to how good it was and how emotional it is.

AL: Did the writing for “Eden” happen at the same time you were writing the band’s latest album “Victorious”?

JC: Yes, I was writing for both things at the same time. It was a very crazy and busy two years. While these two things were going on I also released a side project EP titled “Fight the Fury” along with our drummer Jen’s side project “Ledger”. All of these things were basically written and released in two and half years. Writing for the comic was making me really want to write music so all of these things had me firing on all pistons. Each project worked off of one another.

IM: Was writing the book similar to writing music?

JC: I didn’t notice this until after the book was done and I had read it. I know that may sound sort of silly but, sometimes when you are writing you don’t always notice things others might as you are just going with what is coming out. After I read the book I felt as thou it was very similar to our music. The book is a little dark but it is meaningful. That’s what people say about Skillet songs and I think “Eden” has that same feel.

IM: Can you tell us about the special hardcover edition that will be available?

JC: That’s something that I am still waiting to see myself. I have seen parts of what are going to be in it and I am very excited for the finished version to be available. It’s going to have this really cool axe on it which is my weapon in the book. With this beard I sort of feel like a lumberjack and thought that an axe would be a perfect weapon as opposed to some of the other more futuristic weapons you see in the book.

AL: Is this just a one off book or are there plans to do others?

JC: The band is going to be out on the road until mid December so that’s going to have me tied up for a few months. We have started to talk a little about the possibility of more books but nothing is definite. I think it would be great to do a second one.