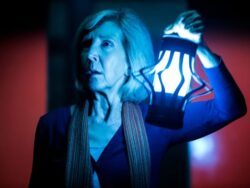 Lin Shaye might be known best for her role of Elise Rainier in the “Insidious” franchise. Lin got started in horror back with “A Nightmare on Elm Street” through the recent “Ouija”, and its prequel “Ouija: Origin of Evil”. Shaye is also known for her comedic roles with the Farrelly brothers, including Dumb and Dumber, Kingpin, and There’s Something About Mary. Media Mikes had a chance to chat with Lin about her new film “Gothic Harvest”.

Mike Gencarelli: Tell us how you got involved with “Gothic Harvest”?
Lin Shaye: I got involved with the film because of Chris Kobin, who is the writer and one of the producers. I have worked with Chris before, we did the “2001 Maniacs” movies together. Bill Moseley, my co-star for this film also starred in “2001 Maniacs: Field of Screams” taking over the lead from Robert Englund, so we have worked together before also. It was an interesting story for me. I have high regard for Chris. He is a smart guy and a very loyal person. He approached me and asked if I wanted to be apart of it, so that’s how I got involved.

MG: Speaking of being trapped, what was it like being restricted to a wheelchair in the movie?
LS: It actually helps with the character in many regards. Being stuck anywhere, especially mobility, it takes a 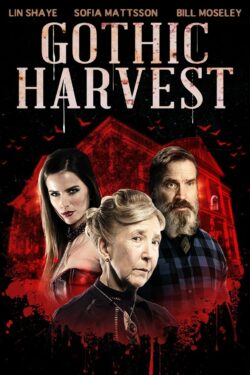 lot of muscle power to move you around. It takes a lot of real muscle to move. We had a really old wheelchair. Nowadays, wheelchairs are made with ball bearings and they spin and do wheelies and they maneuver amazingly. Not back then, you really needed to push to get them through doorways. You have to use your whole body to move them forward, not just your arms. It was a little bit jaunting and gave me totally new respect for disabled people that need to negotiate that in order to get anywhere. It was very difficult. To try and get somewhere it created emotionally a sense of frustration, which was perfect for the character.

MG: You’ve been in horror films from “A Nightmare on Elm Street” all the way through to the “Insidious” franchise; did you ever think you would have become such a horror icon?
LS: NEVER [laughs]. I am just grateful that I am getting to continue to work on such exciting projects. All of the things I have done leading up to this, I don’t really think in terms of genre. I think in terms of storytelling and character. Those are the determining factors for me in order to do a film. I love comedy also. I don’t gravitate to one genre over another. With acting, you making a real impact on people and I feel a real responsibility to looking for material that is about something important. Not education, per se, but reminding people of what is important in life. I just feel very privileged. Especially Elise in “Insidious”, people have asked me why I think she is popular and that is because she is a giver not a taker. I honestly believe people feel safe with her and that is part of her popularity.

MG: Any more plans for the “Insidious” franchise?
LS: There is a rumor but I haven’t seen anything specific. I kind of know what they are thinking and I know the line that they are looking into but I don’t know when it would be because Blumhouse has so much going on right now. The “Insidious” franchise really exploded for them as a company as well as the “Purge” films. I don’t know anything definite but there is a rumor that there will be more.

MG: You’ve also done comedy like “Dumb and Dumber”, “Kingpin”, and “There’s Something About Mary”; how’s it like switching between genres?
LS: The lines all blur in terms of genre. It is really about what is the core of the character. What’s fun for me and even when I was a little kid, I remember loving the idea of being able to step into someone else’s life and disappearing. As an actor you have the luxury of being your buried feelings up in the forefront. It is a very exciting experience. I just feel lucky fortunate of not drawing lines in terms of genre but just finding the truth of the person I am playing.

MG: What do you have upcoming next?
LS: There was a little film I did called “Room for Rent” that is one Amazon Prime. I want everyone to see it. It is some of the best work that I have ever done. It is not a horror film but more of a psychology thriller about a woman’s decline into insanity really. I am very proud of it. Also I am doing the new “Penny Dreadful” series called “City of Angels” for Showtime. I have never done a TV series and it is big machinery. It has a fantastic cast and fantastic scripts. There are ten episodes and I will be in six of them. I play a fabulous character. Nathan Lane and I sort of play sidekicks. John Logan is the creator and he is exceptional. I am very excited for this project and I just hope I do a good job at the end of the day.