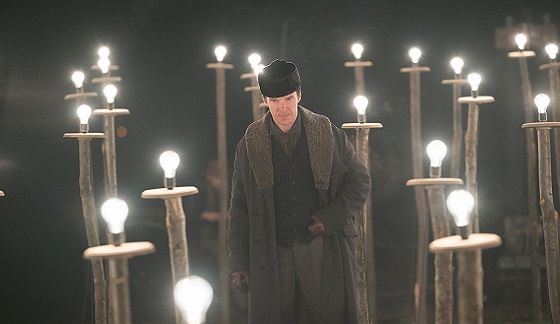 Electricity. We take it for granted much like air and water. It is almost hard to imagine how human civilization ever functioned, much less survived without it. In the totality of human history, it was just a blink of an eye ago, circa the beginning of the 1880s, when electricity was delivered unto the masses by two extraordinary men – Thomas Edison and George Westinghouse. The struggle between these two icons of invention over AC and DC current is dramatized in “The Current War,” a film that made its debut two years ago at the Toronto International Film Festival and languished in limbo until now. With engaging performances by Benedict Cumberbatch and Michael Shannon, and an interesting script, “The Current War” is a quick-paced historical work that is indubitably watchable.

It all begins in 1882 when Edison (Cumberbatch) demonstrates the power of DC current by lighting up a small section of Manhattan, New York. After being snubbed by Edison, rich financier and inventor Westinghouse (Shannon) pursues the possibilities of AC current with equal passion. A war between the two gradually heats up with casualties along the way.

Edison’s sometimes blind, cutthroat ambition, causes him to often make empty promises to his young children and losing out on time with his wife who dies tragically. He refuses to see any possibilities beyond DC current, which takes more power stations and heavier wire. Even a young and eccentric Nikola Tesla (Nicholas Hoult, “Dark Phoenix”) cannot convince him otherwise.

Westinghouse tries to stick to his moral principles by avoiding the use of dirty propaganda that Edison often employs. However, he lets a little envy creep in over Edison’s abundant fame and so he pushes harder to win with the more dangerous AC current, which can run longer distances via thinner wire. A close associate pays a high price for it and Westinghouse, who is dubiously portrayed as being haunted by a harrowing Civil War experience, resorts to similar tactics as those of Edison while forming a partnership with the scorned Tesla, who’s relegated to more of a sideshow within the story.

Directed by Alfonso Gomez-Rejon (“Me and Earl and the Dying Girl”) “The Current War” was originally under the Weinstein Company’s umbrella, but it’s release was sidetracked after Harvey Weinstein’s fall from power. Thankfully, Gomez-Rejon, with the help of executive producer Martin Scorsese, was able to get the film back and did some reshoots. His final product is a rapid-paced, enjoyable work with good cinematography and solid costume designs.

“The Current War” provides a keen look into this likely forgotten period of American history that changed the world forever. Cumberbatch and Shannon dominate the screen with as-expected impressive performances the bring to life these two titans of electrical ingenuity.