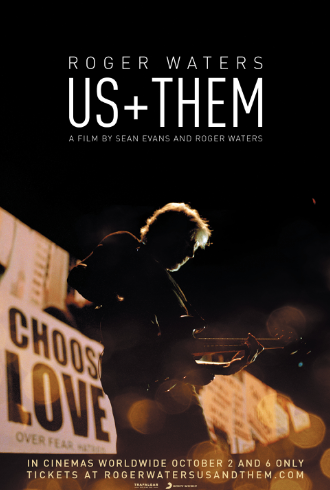 TRAILER UNVEILED FOR ROGER WATERS
US + THEM
FILM COMING TO CINEMAS AROUND THE WORLD
ON OCTOBER 2ND & 6TH
FEATURING SONGS FROM HIS LEGENDARY PINK FLOYD ALBUMS AND FROM HIS LAST ALBUM, IS THIS THE LIFE WE REALLY WANT?

TICKETS NOW ON SALE AT ROGERWATERSUSANDTHEM.COM

London, July 17: Trafalgar Releasing are excited to unveil the official film trailer for Roger Waters Us + Them, filmed in Amsterdam on the European leg of his highly successful and critically acclaimed 2017/2018 world tour, US + THEM. The film will be screened in 2500+ cinemas across 60+ countries around the world on October 2 and 6 only. Tickets to see the film are on sale now from rogerwatersusandthem.com.

Roger Waters, co-founder and creative force behind Pink Floyd, with visionary director, Sean Evans, brings to the screen the live story of Us + Them to inspire you with its powerful music and message of human rights, liberty and love.

The film features songs from Waters legendary Pink Floyd albums, The Dark Side of the Moon, The Wall, Animals, Wish You Were Here, as well as his last album, Is This The Life We Really Want?

“I’m so looking forward to the launch of the movie in October. US + THEM is not standard rock and roll fare, some in the audience may ‘yee haaaa!!!’ Which is ok, but many will weep. That is what I hope for. US + THEM is a call to action. Homo Sapiens stand at a crossroads, we can either pool our love, develop our capacity to empathise with others and act collectively for the good of our planet, or we can remain Comfortably Numb, and continue, like blind lemmings, on our current omnicidal death march towards extinction. US + THEM is a vote for love and life.”
Roger Waters, 11th July 2019

Director, Sean Evans added: “This is a great film – an amazing performance delivered with care, emotion and meaning. Didn’t think it was possible, but I believe we’ve outdone The Wall…”

The event will be screened in cinemas around the world on Wednesday, October 2 and Sunday, October 6 (in Dolby Atmos where available). More information can be found at rogerwatersusandthem.com, where fans