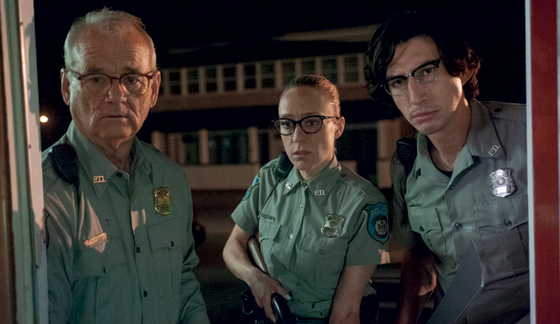 Zombie movies have been a part of the cinema landscape since the 1930s with Victor Halperin’s “White Zombie” in 1932 among the first. George A. Romero’s 1968 “Night of the Living Dead” is regarded as a cult classic with its depiction of cannibalistic zombies. Since then there have been dozens and dozens of zombie flicks, often of low budget origins, featuring the undead scaring the life out of the living. Director Jim Jarmusch (“Paterson,” “Broken Flowers,” “Ghost Dog: The Way of the Samurai”) has thrown his hat into the zombie arena with his comical horror/fantasy “The Dead Don’t Die,” which features an all-star cast that’s sure to make anyone alive look twice. While it may have some clever laughs and some dry one-liners that only star Bill Murray can deliver, Jarmusch’s effort is about as mundane as watching Selena Gomez act.

After responding to a complaint by racist Farmer Frank Miller (Steve Buscemi) that his chickens are being killed by the disheveled eccentric Hermit Bob (Tom Waits), Centerville police Chief Cliff Robertson (Murray) and Officer Ronnie Peterson (Adam Driver) notice something odd is going on. Animals are disappearing, cell phones no longer work, and its daylight way into the night. All of this is blamed on polar fracking, which is denied in news reports by the companies who are doing the fracking. With the poles shifting their positions, it has altered Earth’s rotation, which of course means that the dead begin to rise from their graves.

The town is littered with other recognizable faces including Danny Glover, Chloe Sevigny, Gomez, and Tilda Swinton as, you might guess it, an off-kilter character. I know it’s shocking, but who else could play a Scottish accented, samurai sword wielding, funeral home director? With so many different faces it only makes sense there are several little side stories as the townspeople struggle to avoid having their intestines eaten. They often fail as they are typically slower than the undead and even slower than the film’s pacing, which is often excruciating to sit through.

Besides some great interaction between Murray and Driver, who talk in character about Jarmusch’s script and the repetitive-to-the-point-of-annoying theme song by Sturgill Simpson, the only bright spot of entertainment is Swinton’s performance. Otherwise, the plot is looser than someone who has drank a bottle of Metamucil in one setting. Characters vanish and unidentified objects appear for no reason. The acting is bland, punctuated by Gomez who seems to have no idea what she is doing and would have probably been better off just playing herself. Lastly, the nonsense becomes ridiculous when Jarmusch’s script turns political when he has Wait’s character go on socialist, metaphoric ramblings about consumerism, among other things. If I wanted that then I could have stayed at home and watched a documentary on PBS.