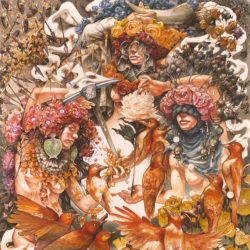 The 17-track release which arrives this Friday is described by NPR as “…Baroness has redigested every sound of the band’s career thus far and synthesized it into something greater. Gold & Grey is the sound of a band becoming a universe unto itself.” Mojodubbed the album “an epic beast,” Stereogum referred to it as “anthemic” and MetalSuckssaid the collection “perfectly encapsulates how Baroness excel at reaching shining peaks and descending into gloomy valleys.” Baroness have recently been featured on the covers of Decibel Magazine, Kerrang! and Loud!, while Revolver will debut a series of collectible covers later this month.

“This is the most clear representation of the artistic vision I have for the band that we’ve ever done,” explains singer/guitar player John Baizley. “Where Purple was me lyrically trying to work out how to adjust to a new normal, I think Gold & Grey is a more grown-up and more subtle collection of words that reflect how I am trying to deal with the longer term effects of having experienced so many terrible things. I choose to use the band as a place where I can take all of this stress, pain, anxiety, all these realities, and make them something good.”

Baroness is in the midst of a tour of Northeastern U.S. independent record stores, performing acoustically this evening at Philadelphia’s Creep Records, with a full band performance slated for Brooklyn’s Rough Trade on release date. A South American tour is slated for later this month, followed by both North American and European treks.

Baroness is John Baizley (vocals/guitar), Gina Gleason (guitar), Nick Jost (bass) and Sebastian Thomson (drums). Baroness received a GRAMMY® Award nomination for the song “Shock Me” (from the 2015 album, Purple) in the “Best Metal Performance” category. Purple saw worldwide praise with Pitchfork saying it features “some of the biggest, strongest songs Baroness has ever written” and Mojo proclaiming “Baroness have delivered their masterpiece.” The album received numerous year end accolades including “Shock Me” at #10 on Entertainment Weekly’s Top 40 Songs of 2015, #6 on Pitchfork’sBest Metal Albums of 2015 and #7 on Rolling Stone’s 20 Best Metal Albums of 2015. The band’s catalog of studio recordings is: Gold & Grey (2019), Purple (2015), Yellow & Green(2012), Blue Record (2009), Red Album (2007), A Grey Sigh in a Flower Husk (Split LP, 2007), Second (EP, 2004) and First (EP, 2004).