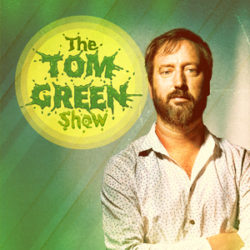 Tom Green – prankster, provocateur, pundit – has a lot on his mind, and this bracing, inventive album lays it all out. A dazzling pastiche of social and political commentary, autobiography, and general Tom-foolery, it mixes hip-hop, punk-rock, goth-rock, confessional folk, electronica, and signature novelty tunes into a heady stew, spiced with samples from the Green’s TV shows, movies, and stand-up comedy routines.

“Thank you for listening to my album. I made this record myself. And I had fun doing it. As a teenager, I became fascinated by rap and electronic music. I spent my summers mowing lawns and working shitty jobs just to scrape up enough money to buy a used drum machine and, eventually, an Akai s-950 sampler and an Atari 520st computer to sequence my beats. I began “digging in the crates” through the vast collection of vinyl at the community radio station where I volunteered. And I started sampling and looping old funk and R&B and jazz breaks from musical legends of the 1970s. I would take the looped beats and bass-lines and drop raps over them in my home studio. Most of my friends would come to my house and have no idea what the hell I was doing.

Flash forward three decades. I never stopped making music, but a few years ago, I decided to start recording again on a more regular basis. This is my first release on vinyl since 1992. I would like you to know that every sound was carefully considered by me. I funneled the drums or bass or guitar noise through a mess of cables and compressors in my own recording studio that I built in Los Angeles. The album includes some audio clips from my recent stand-up comedy, some from the original “Tom Green Show,” and, of course, some funny songs and some sincere ones. I hope you enjoy it.

Please follow me on social media and at tomgreen.com, and we can discuss this recording together. Your support over the years means everything to me. I am always touring all over the world and will probably be performing in a city near you, so please come see me and say hello! And if you are reading this, YOU ROCK!” – Tom

Tom Green exploded on MTV with the groundbreaking comedy show “The Tom Green Show.” Before reality TV, YouTube and social media existed, Tom Green’s man-on-the-street pranks changed television forever. He’s graced the cover of Rolling Stone, hosted Saturday Night Live, guest hosted Letterman, and appeared on Oprah, Jay Leno, Kimmel, Fallon, Conan, The Daily Show and more! The success of the Tom Green Show has landed him roles in mainstream Hollywood movies like Road Trip, Freddy Got Fingered, Stealing Harvard, Charlies Angels and more! Now Tom Green’s sold out Stand Up Comedy Tour is getting 5 star reviews worldwide. Don’t miss the insanely hilarious stand up comedy of Tom Green when he comes to your city. His brilliantly cracked view of the world around him makes for non-stop laughter every time.Ship to Shore PhonoCo are a Brooklyn-based boutique record company shining a light on new-to-the-format music, underappreciated classics and undiscovered gems.