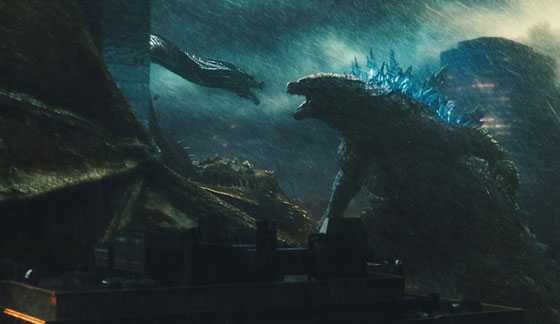 On a scale of Roland Emmerich’s “Godzilla” to the classic 1956 “Godzilla,” where does “Godzilla: King of the Monsters” stand? It’s difficult to say because I haven’t seen all of the kaiju films, so I can’t properly gauge where this one lies. Even if I had watched half of the movies in the Godzilla franchise, I think it’d be inappropriate to rank this one on a fan scale because at the end of the day, I just like watching monsters punch each other. However, I do know this; it’s a definite step down from the 2014 film that rejuvenated the franchise for Americans.

Just like in real-life, “King of the Monsters” begins five years after the events of the first film. The Monarch group, which tracks Godzilla and other titans, continues to track and monitor all the skyscraper sized creatures around our world. The U.S. government, in a throwaway plotline, wants to eradicate the kaiju so that humans can comfortably go about their day without the fear of another city destroying battle. The true human aspect of this story involves divorced couple, Dr. Mark Russell (Chandler) and Dr. Emma Russell (Farmiga), and their teenage daughter, Madison (Brown). The key to the fractured marriage and parental distrust lies within a family death and a device called Orca, which can potentially control the titans.

While only about 10 minutes longer than its predecessor, “King of Monsters” feels longer. That’s because the film jams in so much plot and monsters into the beginning, that when it’s finally time to have those ideas pay off, it jumbles the one-two punch. It also suffers from over explaining what we already know, while barely explaining things that we don’t. It’s actually a bit of an understatement to say there’s a lot going on. The caveat is that none of it is interesting for several reasons that are spoilers that I don’t want to spoil, but also because the film has all these subsidiary characters that it just expects us to remember or already be familiar with. The assumption that we already know everyone’s history is a mistake on the movie’s end, especially since it’s been half a decade since we were acquainted with any of these people, while introducing a dozen new characters. It sometimes even expects us to know the nuances of the monsters.

“King of Monsters” starts off strong, but peters out before the finale. The beginning provides us with a basis for conflict amongst the human players, but instead of delivering on all these interesting promises, it instead treats audience members like unintelligent toddlers. That’s because it throws out all this nonsensical “we’ll explain later” exposition while also bashing viewers across the face with monologues on how destructive humanity is. We get it, we’re terrible people and we’re destroying the planet.

Hopefully 2020’s “Godzilla vs. Kong” is more fun because honestly, no one showed up for a “Godzilla” movie for such an elementary and overbearing eco-message. We showed up to watch monsters beat up other monsters and destroy cities, and at least the film delivers on that end. So is this a good movie? No. Is it a passable, yet forgettable monster battle royale? Yes. The film tries to be too serious when it shouldn’t, and doesn’t lean into the schlock when it should. It’s popcorn fun that’ll leave you with a tummy ache.