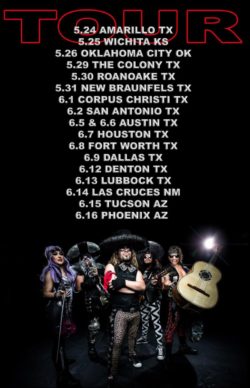 Tour Begins May 24 in Amarillo, TX | Buy Tickets via www.metalachi.com/upcoming-events

METALACHI – the world’s first and only heavy metal mariachi band – have announced several spring tour dates, beginning May 24! The band will perform in Texas, Kansas, Oklahoma, Arizona and New Mexico, wrapping up on June 16. Before then, the band will perform six one-off shows, the first four of which act as METALACHI‘s very in-demand “Cinco De Mayo” dates.

METALACHI was personally invited by comedian George Lopez to perform at the first show, Vee Quiva Hotel on May 2, as part of the grand opening of his Chingon Kitchen at the same location. See below for all currently confirmed dates. Visit www.metalachi.com/upcoming-events for more information and links to purchase tickets.

In a band statement, METALACHI says, “2019 is quickly shaping up to be our biggest year ever and we can’t wait to show everyone what we have in store for them this May and June.”

METALACHI is touring in support of their most recent full-length album, 2018’s Tres. The album is available via all major digital platforms and www.metalachi.com, and features covers of songs originally performed by artists such as Judas Priest, Dio, Journey, Guns N’ Roses and more!

The album features METALACHI‘s popular cover of the Queenclassic, “Bohemian Rhapsody”. The music video, which features a cameo by comedian Felipe Esparza and was directed by Michael Estrella, can be viewed here: https://youtu.be/ISIlsp3LIDk

Hailing from Hollywood, CA via Juarez, Mexico, METALACHI is a musical/comedy stage show that somehow seamlessly blends the world of Spinal Tap and Cheech & Chong into an over-the-top stage spectacle. The band is comprised of a five-piece ensemble of classically trained mariachi musician siblings, that have been fused together with the power of heavy metal. Fans can expect an unlikely meshing of metal classics from artist such as Metallica, Slayer, Ozzy Osbourne and more with traditional mariachi standards from the likes of Vicente Fernandez and Mariachi Vargas de Tecalitlan… all played with traditional mariachi instrumentation but with a stage show that strays far from traditional!

METALACHI has garnered worldwide acclaim for their unique brand of raucous humor and innovative musical mastery, quickly amassing a loyal and diverse fan base of music lovers in addition to gaining praise from music royalty such as Dave Lombardo (Slayer), Vinnie Paul (Pantera, Hellyeah), Eric Wilson (Sublime), M. Shadows (Avenged Sevenfold), Billy Idol, and Howard Stern along the way (fun fact – for the past five years, Sublime has used METALACHI‘s debut album Uno to time their set changes, blasting the entire album over the PA at their live shows).