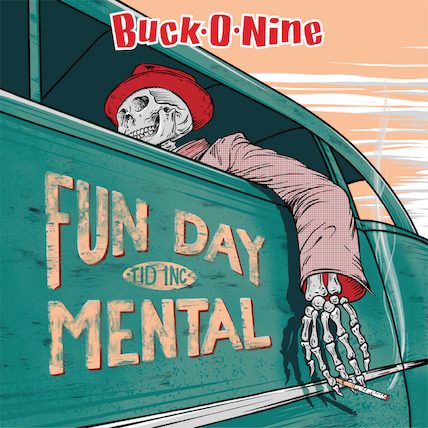 WATCH THE VIDEO FOR THE 1ST SINGLE, “TOP OF THE WORLD,’ NOW AT PUNKNEWS.ORG

Southern California’s beloved and influential ska-punk band BUCK-O-NINE will make their long-awaited return this year with the release of their 6th album, FunDayMental, on April 19th with Cleopatra Records. The band celebrates the announcement of their first record in 12 years with the release of a video today for a brand new single titled

“Top of the World,” that’s streaming at PunkNews.org.  WATCH THE VIDEO FOR “TOP OF THE WORLD” AT PUNKNEWS.ORG: http://bit.ly/2HPtIpdPRE-ORDER FUNDAYMENTAL NOW AT https://orcd.co/eb25v9k

“Top of the World” is a reminder to take a step back from your reality and evaluate your current situation to make sure you’re running positive and sifting thru the chaos with an open mind.” – Jon Pebsworth (vocals) Formed nearly 3 decades ago in San Diego, BUCK-O-NINE were an integral part in the early 90’s ska scene, who shared the stages with acts like The Mighty Mighty Bosstones and The Specials among others and helped spark a global ska phenomenon. Over the years the band released 5 albums, had songs featured in movies and television and enjoyed the success of multiple singles.

Following the release of 2007’s Sustain, BUCK-O-NINE consistently performed live to fans both old and new in Western states, and has now regrouped for an introspective and infectious new record that shows they’ve still got it!. The band’s sixth full-length, FunDayMental, sees them once again combining elements of reggae, rocksteady, rock and punk into a unique amalgam of music that the act has pioneered since 1991. Amazingly, their lineup also features six out of seven founding members and their “newest” musician, bassist Andy Platfoot, has been in the band for 19 years. That sort of history makes Buck-O-Nine less of a band than they are a family and that dynamic is evident on all 14 songs on FunDayMental, which includes the band’s new material alongside reworked versions of fan favorites “My Town” and “Irish Drinking Song.”

“The album is about life, love and unity.  It’s a reflection of our lives and struggles in this crazy beautiful world.” –  – Jon Pebsworth (vocals) BUCK-O-NINE has confirmed a handful of shows in support of the new album with additional dates to be announced soon.