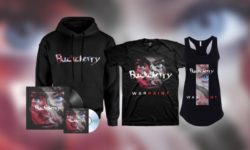 Buckcherry’s new studio album, Warpaint, scheduled for a March 8th release, is available for pre-order HERE starting today. The 12 track album is available in both CD and vinyl formats. Anyone pre-ordering the album digitally will receive the debut single, “Bent”, off the forthcoming release as an instant grat track. The first 100 people pre-ordering will receive a signed poster. Those pre-ordering also have the option to bundle the CD or vinyl with brand new exclusive Buckcherry merchandise.

Warpaint reunites Buckcherry with producer Mike Plotnikoff, who last worked with the band on their platinum certified album, 15. That album produced the top 10 hits “Crazy Bitch” and “Sorry”.

Buckcherry has previously announced the first leg of the 2019 Warpaint tour with special guests Joyous Wolf. Following four Southern California shows next week, the band is heading to the UK and Europe for 15 shows starting February 6th followed by 42 North American shows starting in Sacramento on March 6th. Fans can purchase tickets to the tour HERE.

*Buckcherry will be attending the 2019 NAMM Show and is available for interviews.