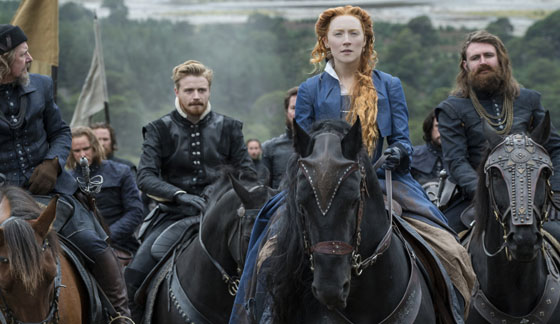 By many accounts Mary Queen of Scots had a tragic life. The monarch was widowed at eighteen and eventually beheaded decades later only after nineteen years in captivity in England. She can easily be seen as a victim of the machinations of the men who surrounded her. The film version of her life however, from lauded stage director Josie Rourke and scripted by “House of Cards” creator Beau Willimon, would not have you simplify it as such. Instead, the film Mary Queen of Scots, presents an intimate portrayal of a passionate young woman navigating the troubled political waters of both Scotland and England. Although at times it can be hard to keep track of everyone in play, Rourke delivers a strong, richly designed film lead by a confident Saoirse Ronan.

Rourke’s take on Mary benefits heavily by opening up its scope to include the simultaneously eventful reign of Queen Elizabeth I (Margot Robbie). From the opening of the film, we know both that Mary’s very existence threatened Elizabeth’s claim to her throne and that Mary would be condemned to die by that same cousin. Yet, with this is mind, the film never quite pits them against each other. Instead Rourke is able to take a more modern look at how each of them faced no-win choices when being challenged by contemporaries frowning upon female rulers. Elizabeth for her part is always wary of taking a husband or providing the heir that her privy council demands while Mary is viewed as a harlot for doing exactly that—but the wrong husband. This dichotomy of the spinster and the slut stereotypes is keenly observed by Rourke and never too on the nose.

Among the menfolk in this story is where I found some difficulty keeping up. It’s a little difficult at first to grasp onto which lord or musician giving Meaningful Looks from the shadows will evolve into an actual relationship for these women. They can be a bit of a blur of beards. Often times when they were talked about while off screen, I regretted not doing a quick wikipedia read of Mary to get a handle on which of them really warranted attention. Still, David Tennant as a vicious Scot priest set firmly against Mary is a snarly delight in this crowd. Buoying every performance, it cannot be understated, is some truly beautiful costume design by Alexandra Byrne .

Finally of course though, the film rests heavy upon its titular monarch and even though she shares much of the marketing with Robbie, this is Ronan’s film. She is by turns steely and vulnerable, whether on the battlefield or in the private company of her lifelong handmaidens. Rourke’s film shines when it spends more intimate time with Mary than many period films usually do with their subjects. Meanwhile, Ronan seizes her titular responsibility with relish and infuses Mary with such conviction that I was rooting for her even as I knew she was doomed.