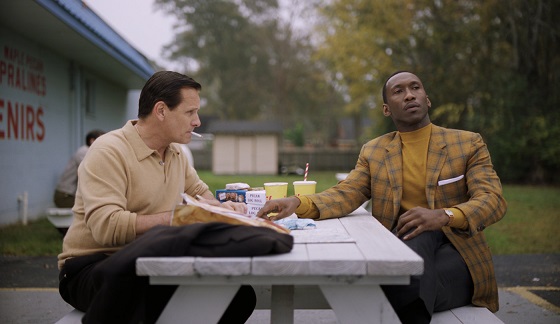 Nominated by the Hollywood Foreign Press Association in five categories at the upcoming 2019 Golden Globes, including Best Screenplay, Best Director, and Best Motion Picture – Musical or Comedy, “Green Book” is one of the most acclaimed films of 2018 with 49 nominations from various cinema-related organizations. Inspired by a true story, this period drama is a surprisingly complex, emotional work considering its director, Peter Farrelly, is best known for comedic fare like “Shallow Hal” and “Dumb & Dumber.” With “Green Book,” Farrelly captures the stark racial divide of 1962 America with an exploration of the relationship between Frank “Tony Lip” Vallelonga (Viggo Mortensen) and Dr. Don Shirley (Mahershala Ali) as they travel across the Midwest and Deep South.

It doesn’t take long to figure out that Tony Lip is a man you don’t want to mess with as he is the kind of tough guy who will hit you when you get out of line and will hit you harder if you strike back. Tony is thus the right fit as a bouncer at a New York City nightclub that’s frequented by wise guys from the Italian mob. However, despite their efforts to lure him to their line of business, Tony stays on the straight and narrow, sort of, as he is more than happy with being a devoted family man. Now while that’s all well and good, Tony has a set of racist attitudes towards people of color, exemplified when he tosses two water glasses into the trash after two black handymen drink from them in his house. When the nightclub he works at is shut down for remodeling, Tony Lip resorts to all sorts of ways to earn money for his family, including his participation in an impromptu eating contest that gets him fifty dollars. Thanks to his reputation as a man who can get things done, Tony Lip is called in to interview for a job as a driver for famed classical pianist Don Shirley.

It doesn’t go well at first because while Tony Lip is about as uneducated and uncultured as they come, Don holds multiple degrees and can speak several languages. Ultimately, Don hires Tony Lip because he needs someone who can protect him during a two-month concert tour that will take them through the heart of the segregated Deep South. As the two men learn more about each other, the more their divides begin to melt away to be replaced with curiosity and even friendship. This is helped by the conditions they witness as Don experiences for the first time the true pain of segregation and Tony Lip has his eyes opened to the injustice of it all.

Farrelly’s creation, with its terrific music selection, costumes and lingo, puts us in a time machine that takes us back to an America that had yet to lose its so-called innocence to assassinations and the Vietnam War. “Green Book” reminds us that that innocence was tainted with bigotry and hatred. It also reminds us how ignorance can be overcome with unity. In addition to its smartly written script and solid direction, “Green Book” contains a pair of dare I say Oscar nomination worthy performances. Mortensen dazzles with his knack to bring to life every subtle nuance of the characters he plays. This role is no exception as he helps make Tony Lip someone we can truly care about even though in the beginning it’s a little tough to do. Ali, a 2017 Oscar winner for “Moonlight,” gives Don a vulnerable sophistication while also breathing out a certain degree of naivete without seeming to break a sweat. It all adds up to “Green Book” being the type of rare movie where everyone can feel a little bit happier about the world when the lights go back on.