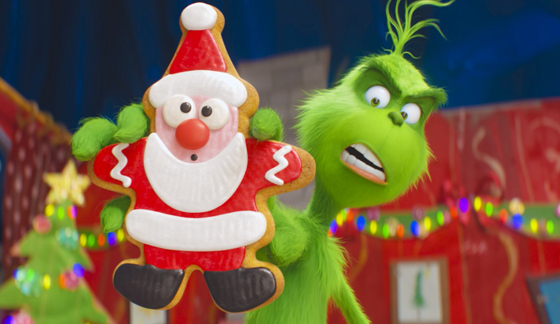 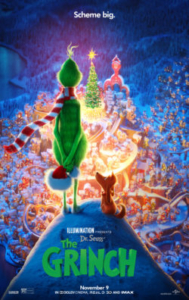 “Dr. Seuss’ The Grinch” is a moderately safe viewing experience for children. I say this because the past several films churned out by Illumination have been less than stellar with questionable ethics, and they were more about selling toys than they were about telling a genuine story. Illumination has managed to create a crowd pleaser for kids new to the story. But while its super sugary goodness may satisfy kids, it’ll certainly give their parents a toothache.

“The Grinch” is fairly similar to the book and the television special that followed, give or take a few creative liberties that are equally distracting or amusing. Benedict Cumberbatch voices the furry green creature that loathes Christmas, and honestly does a spectacular job. He’s likeable, yet cruel, as well as casually dorky, yet firm with his voice. The rest of the voice talent, Kenan Thompson, Rashida Jones, and others, feel like they were only given a few hours to rehearse and read their lines.

When taking into account, the films based on Dr. Seuss’ work, “The Grinch” stands firmly near at the top by default. It’s not gross and obnoxious like the live-action “Cat in the Hat” or a complete misfire like “The Lorax,” another Illumination film. It’s possible the studio learned from those mistakes, catering towards fans of the original work while making sure they didn’t make it to obnoxiously modern with pop-culture references.

The criticisms of commercialism aren’t lost on the 2018 update on Dr. Seuss’ classic tale. “The Grinch” spends several moments touching upon how the title character is transfixed on the buying, receiving and gluttony of the holidays. It’s the viewpoint of a curmudgeon who’s spent his life loathing a holiday that’s beloved by all. You probably know the story by now about how the cynic softens and how his heart grows multiple sizes by the tales end. It’s hard to take that message at face value when Illumination’s only reason for retelling this tale is for financial reasons.

There are several attempts by the creative team to inject some original, unique ideas into the timeless tale, but only one seems to actually stick. The idea that the Grinch is an orphan, whose deep-seated dislike for Christmas stems from his parentless childhood and the PTSD that follows helps bring everything around in a more complete circle. Other subplots brought in to help the movie don’t resonate at all, like a group of kids in town plan on capturing Santa or Cindy Lou Who’s mom who’s in desperate need of some R&R.

Just like Ron Howard’s film in 2000, this film doesn’t hold a candle to the 1966 television classic. But with television sliding to the wayside with the rising of streaming services, “The Grinch” actually has a legitimate shot at replacing that hand drawn classic. “The Grinch” is bright, flashy and silly; a perfect combination for young children who’ve had their parents read them the Dr. Seuss’ book throughout their young life during the holidays. Honestly, there’s nothing wrong with that. That’s the kind of comment that could get a critic crucified in the domain of public opinion, but anytime Dr. Seuss’ works are adapted for TV or screen, it’s a cash grab regardless of how good and wholesome the final product is.