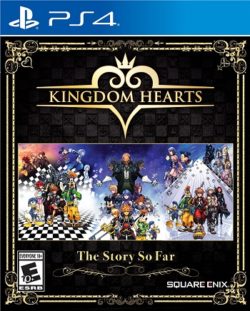 In KINGDOM HEARTS –The Story So Far–, Keyblade wielders can relive the magical adventures of Sora, Donald Duck, Goofy and friends as they attempt to stop the Heartless invasion that threatens their universe. Fans will travel to iconic Disney locales and join forces with beloved Disney and FINAL FANTASY® characters in order to fight back against the threat of darkness and bring back light to all worlds.

KINGDOM HEARTS –The Story So Far– is now available to preorder at the Square Enix Online Store: sqex.link/Khthestorysofar and other participating retailers.

This title will be available on October 30 for $39.99 and has been rated E10+ (Everyone 10+). Please visit the Entertainment Software Rating Board (ESRB) website at www.esrb.org for more information about ratings.

About the KINGDOM HEARTS Series
KINGDOM HEARTS is a series of role-playing games created through the collaboration of Disney and Square Enix. Since the first KINGDOM HEARTS was released in March 2002 for the PlayStation®2 computer entertainment system, the series has expanded with several additional entries. The series celebrated its 15th anniversary on March 2017, and has shipped over 25 million units worldwide.