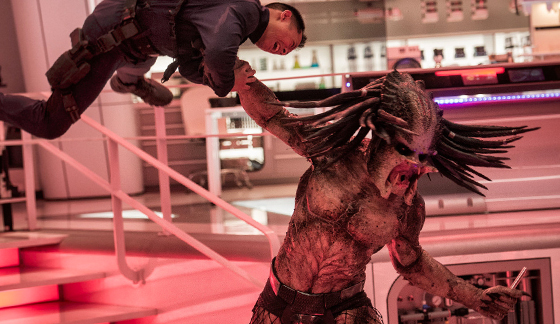 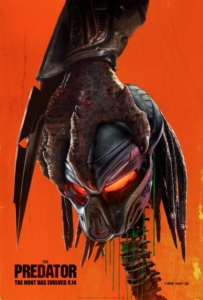 Not too long into “The Predator,” former Army Ranger, Quinn (Holbrook) is assessing an unthinkable predicament. He’s shackled in a military bus that’s carting around other former soldiers. These unmentionables of the U.S. military range from a veteran who’s PTSD has somehow manifested into ill-timed Tourette’s to a former Marine who grins through his suicidal tendencies. But Quinn, after listening to every sad story, might be the king of crazy or the only sane one on-board. He tells them that he’s handcuffed alongside them because he saw an alien. Unfortunately for his future comrades, and the audience, he’s not the Predator killing hero we need. And “The Predator” may not be the Predator movie we need either.

It’s not that Holbrook doesn’t have the muscles to go toe-to-toe with the big boys; it’s just that he’s not charismatic and his one-liners usually fall flat. I think that’s because most of his career has been spent being an antagonist, and he doesn’t have the pedigree that an Arnold Schwarzenegger or Bruce Campbell might have when spouting cheese at CGI monsters and creature effects. At least the cast around Holbrook makes up for it. Some of the highlights are a delightfully funny Keegan-Michael Key, an energetic scientist turned mercenary played by Olivia Munn, and Sterling K. Brown, who plays a bad guy so witty, you tend to forget or question why he’s pulling the trigger so quickly.

If I was to ever summarize the previous “Predator” films for someone who had never seen them, I’d have no problem. I’d actually have no problem hyping them up despite their flaws. I couldn’t do that with “The Predator” and I’d have a harder time summarizing what exactly the film is about. That’s mainly due to the script, that’s not only all over the place, but has a jumbled tone that squeezes in serious sci-fi stakes, family drama, juvenile humor, macho man action and stylized gore. Since it jams in so much with little finesse, the film never rises above being forgettably amusing. Even if you enjoy this movie, you’re never likely to watch it again or enjoy it as much on a second viewing.

I’ve generally liked the work of director and writer, Shane Black. He has this infectious energy about his films and he creates these subtle nods to iconic bits of pop-culture from his own childhood. Surely you’ve seen some of his best pieces, like “Lethal Weapon” or “Last Action Hero.” Tiny traces of DNA from those films are in “The Predator,” like when we first meet the Predator hunting crew in that military bus or when the Predator itself gets in on the black humor after slaughtering countless unnamed soldiers. During those moments, and several others, I tended to slide into a comfort zone where I could care less about the film’s glaring mistakes. 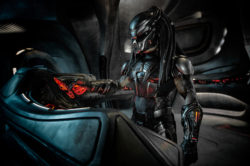 I have one moral quandary about the film’s use of a child with autism and how he fits into the film’s overall narrative. Not only does it feel lazy to use Jacob Tremblay in that fashion, but it feels insulting to people with autism. I won’t dive too much deeper into my major gripe because my frustrations could easily be misplaced. It’s possible that Tremblay’s character wasn’t eloquently relayed, but the antiquated nature of his usage in the film’s plot seems misguided on Black’s end.

I had a real fun time while watching “The Predator,” but as I think about it in hindsight, I’m finding it troublingly easy to nitpick it to death. I think that’s because Black has done better and the “Predator” is still an underrated franchise deserving of praise. The original “Predator” was actually panned upon its initial release in 1987 by several outlets like the New York Times and Variety. They called it dull and average, but it’s now viewed as a quintessential action movie, spawning thousands of fanboys who’ve taken it upon themselves to write their own fan fiction involving the iconic alien. Time may tell if Black’s sequel is worthwhile, but I can’t help but think there’s a fanboy whose script could put Shane’s script to shame.