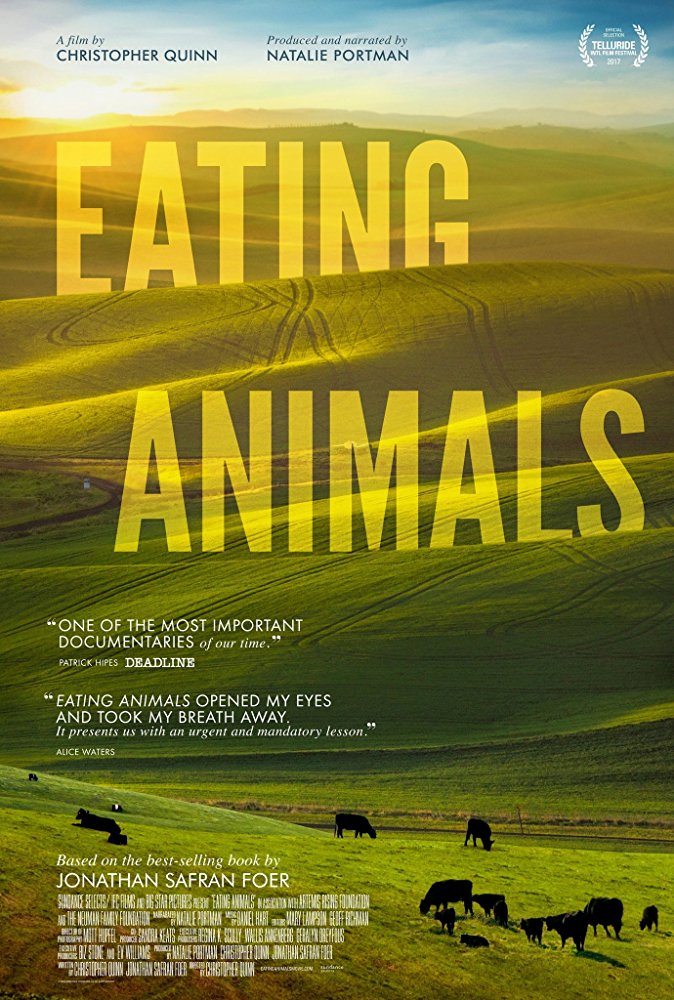 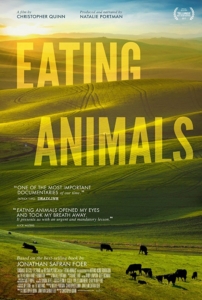 After having reviewed movies for almost 20 years, it is a challenge to think of a work that has had more of a personal connection to yours truly than the new anti-factory farming documentary “Eating Animals,” with Academy Award-winner Natalie Portman providing its narration. For you see, even though I may be a mild-mannered film critic I have also been a family farmer my entire life, as has eight generations before me. “Eating Animals” doesn’t take aim on family farmers necessarily, but it most certainly shows what the effects of industrial farming has had on them since its skyrocketing growth beginning in the 1970s. The gross mistreatment of the animals we eat on our dinner plate is sickening to watch, but “Eating Animals” makes a valid point that it is nevertheless a dirty little secret everyone already knows yet chooses not to think about.

Director Christopher Dillon Quinn, who based his documentary on the 2009 novel of the same name by American author Jonathan Safran Foer, introduces us to a turkey farmer in Lindsborg, Kansas who is resorting to old practices of raising birds because of his disdain with genetically modified turkeys. Other farmers in the swine, dairy, beef, and fowl industries are also highlighted to demonstrate the difficulties they face trying to remain on their own. Quinn also examines the risks whistle blowers within the factory farm industry take when they try to shed light on the darkness. This latter point is punctuated with the enlightening and disturbing fact that several states have passed “Ag Gag” laws that essentially prohibit and punish whistle blowers.

Overall, there is nothing revolutionary about what “Eating Animals” has to say about family farms. It’s a tradition/business that has been vanishing at an alarming rate for a few decades now. Quinn wants to lay a lot of this at the feet of corporations like Tyson, who have indeed had a negative impact on farming communities that once thrived when small farmers cooperated with one another. Now the farmers who work under contract for a company like Tyson, according to “Eating Animals,” are prohibited from helping each other and are treated like indentured servants. However, there are many more factors that have led to the demise of family farming that is left out of Quinn’s documentary.

Farms were lost during the 1970s not simply because of the explosion of prepackaged frozen dinners, as the film implies was a part of the problem, but because interest rates rose so high during the latter part of the decade that some farmers went into bankruptcy thanks to the loans they took out on their land. Quinn also ignores the fact that because of the rising costs of land, equipment, and seed/feed, most young people cannot afford go into the business if they don’t inherit the land outright. (It’s no coincidence that the farmers he interviews are middle-aged men.) There’s also a lack of desire among increasing numbers of young people to put in the long hours that it requires 24/7, 365 to maintain a farm and make it successful. Not to mention that farming is one of the most dangerous jobs to have considering the equipment that’s used and what larger farm animals can do.

In a back-handed way, “Eating Animals” does slam farmers for the ones being responsible for the disappearance of a large, freshwater lake in California. No mention is made of the historic draught the Bear Flag Republic has endured over the past several years or the fact that without irrigation, crops and animals in many parts of that state could not thrive. Quinn’s effort also mentions animal feed laced with anti-biotics and how it has contributed to the rise of superbugs. Unfortunately for him this is not the case anymore as the use of antibiotics in feed was eliminated effective January 1, 2017. The real problem, and it’s not discussed enough, is the explosion in the world’s population over the past 50 years. The consequential soaring demand, in part manufactured by corporations like Tyson with clever marketing, is what has put extreme pressure on the farming industry and helped propel the rapid growth of factory or industrialized farming.

Quinn does a nice job of exploring some of the ecological consequences of the swine and fowl confinement houses in the Carolinas, and the horrific distortions of what nature had intended when it comes to the animals we eat. The images of animals being treated cruelly at these confinement houses is stomach churning to say the least and may very well turn some folks who watch this film into vegetarians. While “Eating Animals” is a solid documentary, it still fails to give this topic the thorough examination it requires and leaves out a lot of details it should have included.

Overall, there is nothing revolutionary about what “Eating Animals” has to say about family farms. It’s a tradition/business that has been vanishing at an alarming rate for a few decades now.