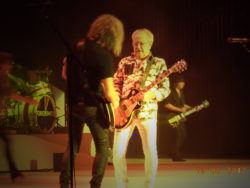 “KHIT Radio….all the Hits, all the Time!!!” Don’t you just hate it when you attend a concert and the bands give you some of their hit songs, the ones you know from radio airplay growing up. Or from the constant hours you spent listening to the albums and cassettes you bought at Musicland? But instead they also play a bunch of songs you do not know….”Here’s one from our 3rd album”….ummm, yeah….time to hit the bathroom and concession stand. Well, there was none of that for the Foreigner 40th Anniversary tour stop at Kansas City’s Starlight outdoor venue (weather was great – just about perfect). If you got out of your seat at all, you missed out.

The show began with the Jason Bonham Led Zeppelin Experience, appropriately starting with “Rock N Roll,” “Black Dog,” “Over the Hills and Far Away”…straight through for a total of nine of Zeppelin’s biggest hits, wrapping it up with “Whole Lotta Love.” No “Stairway to Heaven” (thank you). I’ve never been a huge Zeppelin fan, but it was entertaining, with lead singer James Dylan holding his own on vocals and of course, Jason Bonham in charge from behind the drum kit.

Up next, in my honest opinion, the best part of the whole evening, Cheap Trick. They took the stage, opening their show as always with “Hello There,” then rocking through classics like “Big Eyes” and “Ain’t That A Shame.” They threw in a couple for the ladies, “If You Want My Love” and “The Flame,” then broke out the BIG HITS including “I Want You To Want Me,” “Dream Police” and “Surrender.” The band wrapped up their set with “Auf Wiedersehen” and “Goodnight.” Robin Zander’s vocals: still got it. Tom Peterson on Bass: doing fine. Rick Nielsen ROCKS and yes, his son Daxx Nielsen is still the drummer. And, yes, I still miss Bun E. Carlos. 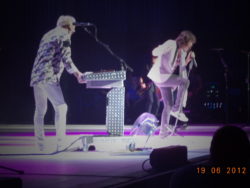 40 years is a long time in the world of rock and roll…most bands never see that kind of longevity. Even with a few years of missing from radio, with no new music, if you’ve ever been on top with monster hits your fans will keep those songs alive. Foreigner is just that kind of band. They brought the best of their best for this show, opening with “Double Vision,” “Head Games” and “Cold as Ice.” They kept going and going, mixing power ballads like “Waiting For A Girl Like You” with rockers like “Dirty White Boy,” “Urgent,” and of course, “Jukebox Hero.” They closed the show, assisted on backing vocals by a choir from the local Saint Thomas Aquinas High School, with their biggest hit to date, “I Wanna Know What Love Is” followed 1978’s “Hot Blooded.”

I enjoyed it all…..while Mick Jones is showing his age at 72, his guitar playing is exceptional. Lead vocalist Kelly Hansen, apparently attempting to channel Steven Tyler, can work the crowd well and delivers vocally.

NOTE: Lou Gramm is playing a few shows on the 40th Anniversary tour, but alas, KC was not one.